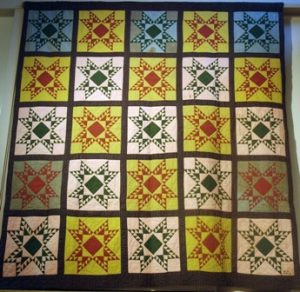 These are quilts that were made, according to the family stories, either as wedding gifts for a young couple or were made by a young woman in anticipation of her marriage.

The oldest dated quilt in the exhibit is a “saw-tooth star” quilt (pictured above) made by Mary O. Loux (1837-1899) of Bedminster Township, Bucks County, in June 1858, a year before her marriage to Enos F. Hunsberger (1835-1903) of Plumstead Township.  They were members of the Deep Run East Mennonite congregation. The bottom right corner is signed and dated “Mary Loux, June [?] 1858.” It was passed down in the family to her grandson Paul N. Hunsberger (1902-1981), and was donated by their son Ray Hunsberger, in memory of Paul N. & Dorothy A.  Hunsberger.

Enos and Mary Loux Hunsberger, circa 1890

Another wedding quilt, made in 1863 for William G. Gross (1839-1913) of Plumstead Township, Bucks County, was also a friendship quilt.  It was probably made by his future wife Anna Godshalk (1843-1892) and her sister Sarah Godshalk and given to William as a gift before his marriage to Anna in November of 1863.  The center patch is inscribed: “The Property of William Gross, presented by my friends.”  Two patches next to his have the names “Anna Godshalk” and “Sarah Godshalk” in hearts.  The other patches have the names of friends and relatives in the Bedminster-Plumstead-New Britain area of Bucks County.  Two patches have names inscribed with “Canida West” (Ontario).  The quilt survived a 20th century house fire and resulting water damage, and is on long-term loan from a descendant.

Friendship quilt made for William G. Gross, just before his marriage in 1863.

A “churn-dash” dowry quilt, circa 1883, was made by Lizzie (or Betsy) K. Wismer (1862-1941), daughter of Samuel & Elizabeth Kulp Wismer, of Bedminster Township, Bucks County, and a member of the Deep Run East Mennonite congregation.  Family tradition states that Lizzie made this quilt in anticipation of her upcoming marriage, but her fiance died suddenly before they married, and the quilt was put away.  Lizzie never married, but later gave the quilt to her nephew Harvey M. Wismer.  It was passed down to his granddaughter, Jean Wismer Friesen, who donated it to MHC.

Quilt made by Lizzie Wismer, in anticipation of a marriage that never happened.

Single sisters Mary and Lizzie (right) Wismer, circa 1890, in front of their home in Bedminster Township.

Mary and Lizzie Wismer with family members at their farm home in Bedminster Township, circa 1890. Their nephew Harvey (who received Lizzie’s quilt) is on the right.

A lovely “lone star” quilt was made in about 1927 by Priscilla Cassel Stauffer (1853-1934), wife of Levi Stauffer, of Vernfield, Montgomery County, and given as a wedding gift to her granddaughter Esther M. Stauffer (1905-1994) of Vernfield, when she married Raymond G. Musselman in 1927.  They were all members of the Indian Creek Church of the Brethren in Vernfield.  It was passed down to their daughters, Lucy Musselman de Perrot and Ruth Musselman Cunningham (the donors).

Lone star quilt made in 1927 by Priscilla Stauffer for her granddaughter Esther Stauffer.

“Friendship” quilts usually have a set of names of friends, relatives or acquaintances printed on them and were often made for and given to an individual on a particular occasion.

One friendship quilt, circa 1890, was made and given by students and their mothers to Annie C. Roe (1862-1934), a teacher at the Western Brick School on Stump Rd. in Plumstead Township, Bucks County.  The names of her students are lettered on it.  In 1895, she married Mahlon G. Gross (1873-1937), from a Mennonite family in Plumstead Township, and soon discontinued teaching school.  At the time of their marriage, they were members of the Doylestown Methodist Episcopal Church.  They soon moved to New Jersey, but later returned to Bucks County and joined the Doylestown Mennonite Church, where they were members the remainder of their lives. Mahlon was ordained a minister there in 1920. The quilt was passed down in the Gross-Moyer family to their grandson Clifford W. Moyer, whose widow, Marie B. Moyer, donated it to the MHC.

Friendship quilt made for teacher Annie Roe, circa 1890

Neighborhood around the Western Brick School, in western Plumstead Township, 1891. Annie Roe was a teacher here when she was given the quilt by her students and parents.

Another friendship quilt, dated 1897, was made by Mary G. Gehman (1877-1943) of Upper Hanover Township, Montgomery County, and a member of the Bally Mennonite congregation. Mary asked her female friends and relatives to make blocks for her quilt; she received so many blocks that she had to make two quilts to use up the blocks.  Her cousin Daniel G. Gehman, a printer in Bally, printed the name of each friend on separate patches to place under each block, and then printed his own name and date 1897 on a patch at the top. Mary later married John S. Kriebel in 1914.  Donated by Mary’s daughter Lydia G. Kriebel.

Friendship quilt assembled by Mary Gehman, with blocks made by various friends, 1897.

A “basket” pattern quilt in the exhibit was also a token of friendship, and is inscribed “A Christmas Present from Mary A. Monteith, December 1911.”  Made by Mary A. Monteith who lived along the Allentown Road near Lansdale, Montgomery County, it was given as a Christmas gift to her friends and neighbors, the Irwin R. & Bertha Pross Swartley family of Towamencin Township.  They knew her as “Auntie Monteith.”  This quilt was later exhibited by Bertha Swartley at the 1927 Montgomery County Fair in Hatfield, Pa., where it won second prize.  Gift of Austin P. & Sara E. Swartley.

Quilt made by Mary Monteith, 1911, as a gift for her neighbors

The quilts and their stories, preserved by the families and passed on to us by the donors, are a colorful and rich part of the Mennonite Heritage Center collection and the current exhibit.  The “Riot of Color” exhibit runs through March 3, 2017.  Come see it!