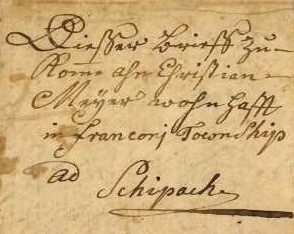 Elizabeth Oblinger was a sister of Christian Meyer/Moyer, early Mennonite deacon at Franconia, and sister-in-law of Henry Funk, the bishop. Here her husband, Nicholas, writes from far away — “beyond the Blue Mountain” (Palmerton, PA area) — to complain that Elizabeth has not received the inheritance due from her father’s estate. Nicholas wonders if perhaps the old father (Christian Moyer Sr.) “did something in his last sickness and disinherited Liesabeth, that he was frightened and led to doing so thereby.”

Potentially, Elizabeth had been disinherited by her father because she forsook the Mennonite Church and joined her husband’s Church of the Brethren. In those days, there was conflict between Mennonites and Brethren at Franconia, with the Brethren suggesting that Mennonite baptism by pouring was not biblical and that Mennonites should be rebaptized by immersion. Or the Oblinger’s may have moved away from Anabaptist faith entirely (see note 4 below).

NOTE: If you’re interested in Moyer family history, join Forrest Moyer and Joel Alderfer on a one-day tour of sites related to the Moyer family (including the early generations in Franconia). The tour will take place Saturday, September 12, 2020. For information and to register, visit Moyer Family History Bus Tour.

This early piece of correspondence was discovered among a group of much later papers in the Norman M. Wismer Collection. A literal translation is offered here.

To heart-beloved brother Christian Meyer [note 2] and dear brother-in-law Henry Funk [note 3], as well as to your wives and children, our all-round friendly greeting, along with a wish for everything loving and good regarding soul and body, from me Nicklaus Oblinger and Elizabeth Oblinger. [note 4]

We can not neglect to inform you with these few lines that we are all, God be thanked and praised, still in good health. To hear the same from you would be dear and joyous to our hearts.

Brother-in-law Christian, you may well take it amiss that I did not visit you when I was last down. The reason was that I heard from certain people that Elizabeth was not to inherit from her father [note 5] more than three pounds money of her inheritance, beyond what she had already received — which we find impossible to believe, since the father had said to Liesabeth on his deathbed yet that she should have her share [just] like another child — since she had asked him, after she had heard from other people that he wanted to disinherit her. So he said to her that it was not thus, but that she should [have] her inheritance like another child. But perhaps unknown to us Father did something in his sickness, when he was perhaps very sick and weak -­ that he did something in his last sickness and disinher­ited Liesabeth, that he was frightened and led to doing so thereby — [if so] we are certainly sure that you are convinced in your hearts and feelings that it was not rightly and justly done, [in light], further, of the fact that the mother [had] enjoined the father, from her own deathbed, as Liesabeth has heard, that she was not to be disinherited. Further, if you consider and ma­turely meditate in what kind of general pathetically troubled condition Lisabeth and our child Christel [note 6] find themselves, regarding their great lack of hope [appar­ently depression], so that we have to have our own work done by other hands, and thereby I myself am much hindered, and can not order my affairs as I otherwise could; if you see — it is well known to you — and as we know, while Father still lived, we were in fairly equal standing with each other regarding what each had [already] received. We hope that Elizabeth’s share will come to us from the estate just as to her siblings — and certainly if you take into consideration, and weigh the sorry condition of the lack of hope of Elizabeth and Christel and that the other children are small and not grown up and [I] have yet more to hope for [them]. And on top of all this we were so unfortunate with our horses last winter that we had 40 pounds worth of loss. And [if] you rightly consider and think over what has been described above, you will certainly not deny allowing Elizabeth’s due share to come to her from Father’s estate. And since as I’ve explained I can not manage as I otherwise could, because of [our] difficult and troubled household condition [note 7], I do hope you will be so good as to write me by the next opportu­nity as to how things stand.

For the rest, we all greet all our friends again a hundred thousand times, and commend you together to the dear protection of the grace of God the all-highest, and remain always your true friend and brother-in-law.

[1] This area, above the Blue Mountain, in 1752 was an undefined and unsettled wilderness where American Indians lived. The Oblingers lived near the Lehigh Gap (on the Lehigh River) in what is now Lower Towamensing Twp., Carbon County, PA, twenty miles north of Bethlehem. The only other white settle­ment further north was at Gnaddenhütten, the Moravian mission to the Indians. [Click here for a 3D view of the area on Google Earth. The Oblinger homestead was just beyond the mountain, in what is today Palmerton or Aquashicola.]

[2] Christian Meyer Jr. (ca.1705-1787), of Franconia Twp., Montgomery Co., and a deacon in the Salford and Franconia Mennonite Congregations, was a brother to Elizabeth Oblinger, wife of Nicholas.
[3] Henry Funk (died 1763), of Franconia Township was a miller and Mennonite bishop in the Salford-Franconia area. He was married to Anne Meyer, daughter of the immigrant Christian Meyer and a sister to Elizabeth Meyer Oblinger. Funk and Christian Meyer Jr. were executors of the estate of Christian Meyer Sr.
[4] Nicholas Oblinger (ca.1712-ca.1785) was the son of the German Baptist immigrant Claus Oblinger, died 1730 in what is now Franconia Twp., Montgomery Co. Nicholas married Elizabeth Meyer, daughter of Christian Meyer (d.1751) of Lower Salford Twp. They owned land and lived in what is now Harleysville, until April, 1751, when they sold and moved above the Blue Mountain (now Carbon County), where they obtained land in June, 1751. Here, Oblinger built something of a stockade around his homestead, which became a stopping point for travelers above the Blue Mountain. Benjamin Franklin recorded stopping here for lodging on January 25, 1756 on his way to the site of the destroyed Gnadenhütten, where he was to erect a new fort (Fort Allen). During the construction of Fort Allen, Nicholas Oblinger hauled supplies to the fort. In February, 1756, he presented a bill for nine days work and three wagons used for hauling. Oblinger and his stockade later became entangled in, and was apparently the partial cause of, some of the violence between Indians and whites in the area in 1763. Companies of soldiers were at times quartered at Oblinger’s and on one occasion in August of 1763, several traveling Indians were murdered by soldiers in or near Oblinger’s barn. This was probably one of the causes of the subsequent massacres by Indians in October, 1763. Nicholas Oblinger’s son Samuel was enrolled in the Frontier Rangers. This raises a question about Oblinger’s religious affiliations and sympathies.
[5] Elizabeth Oblinger’s father was the immigrant Christian Meyer (d.1751) of Lower Salford Twp., Montgomery Co. He and his wife Barbara were founding members of the Salford Mennonite Congregation and lived at what is now [the Wal-Mart shopping center at] the intersection of Routes 113 and 63 in Harleysville. In his will, probated June, 1751, Chris­tian Meyer names his daughter Elizabeth as an equal heir to his estate. This was at the very time that Eliza­beth and Nicholas Oblinger left Lower Salford Township and moved above the Blue Mountain. And then the question of disinheritance arises. Why did the Oblinger’s leave Lower Salford and move to a frontier area? Was there a disagreement in the family? Was the father Christian Meyer unhappy with the Oblinger’s moving to the frontier?
[6] The Oblinger’s son Christel, or Christian, who apparently had some physical or mental handicap, is not men­tioned in the History of the Oblinger Family. He may have died young.
[7] It would appear that Oblinger’s wife Elizabeth had some handicap and was unable to care for the household, causing a “difficult and troubled household condition.” Another reason for Oblinger to plead for Elizabeth’s inheritance.

We have no record of the outcome of this letter, so we don’t know if the inheritance was received. We do know that the Oblinger-Uplinger family remained in the lower Carbon County-northern Lehigh County area and left many descendants there.