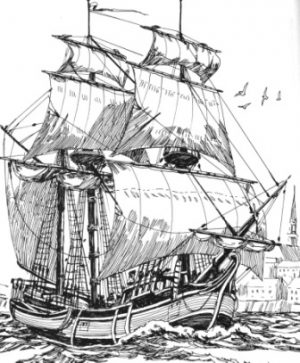 A new exhibit entitled Opportunity and Conscience: Mennonite Immigration to Pennsylvania opens at the Mennonite Heritage Center tomorrow, Saturday, April 1, and will be on display through March 31, 2018. Hours are 10am-5pm Tuesday through Friday, and Saturday 10am-2pm. Admission is a suggested $5.00 donation. There is handicap access, and special tours can be scheduled.

ALSO, don’t miss your chance at a ticket (only 23 left!) to our special Heritage Banquet on April 28, where recent immigrants will share their stories, faith, and food, alongside “Frederick Alderfer” an 18th century immigrant who will revive and present his story in the new exhibit.  CLICK HERE to reserve tickets.

In recognition of this anniversary, the Mennonite Heritage Center has mounted this special year-long exhibit, highlighting the experience of 18th century Mennonite immigrants, their motivations and process of migration, and how they settled in eastern Pennsylvania. The exhibit includes a fascinating simulation by local craftsman Earl Ludwig of a passenger compartment on an 18th century immigrant ship, and a depiction of a Stube (or parlor/living room) in an early immigrant home, furnished with original artifacts of the 18th century. Enlargements of scenes and images from the period further illustrate the theme.