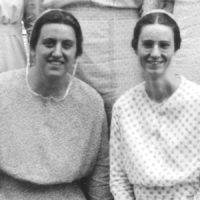 Alma Ruth (1900-1975) was the daughter of bishop Joseph and Mary Kratz Ruth of Line Lexington. She was a long-time worker at the Diamond Street Mennonite Mission in Philadelphia. These memories were transcribed by John L. Ruth from a manuscript purchased at the auction of the property of Clarence Ruth, Alma’s nephew. The manuscript is now archived at the Mennonite Heritage Center, along with Alma’s scrapbooked memories of Philadelphia mission work (Hist. Mss. 518).

Life, what is it? A short distance from the cradle to the grave.

Life on the [Noah] Ruth farm in the 1800’s [Alma’s grandparents]: four boys and one girl enjoy life on the rich ninety-acre farm in the Neshaminy Valley.

One day the mother [Maria Gehman, b. 1835] changed to underwear which was still damp. The result – Tuberculosis, which then was 100% fatal. The second son, Joseph (18) [Alma’s father], was also ill with digestion problems. One day the father accompanied some visitors out to their wagon and said, “Yes, I don’t know which will go first – Mother or Joseph.” [Mrs. Ruth, age about forty-five, died in 1878.]….

After the mother’s death it was quite evident to the family that Anna Mary, then sixteen, could not carry the duties of the house alone. It was decided that one of the four boys give full time in the house. Isaiah, the youngest, immediately chose this easy task. After one day of this “cinch” job, he chose the work of overalls, and gladly turned the apron strings over to Joseph, who then helped with cooking, cleaning, baking, butter-churning, cheese-making and various duties in the home. When guests were present, Anna Mary would set the table and get the food on the table. Joseph would do the cooking on the kitchen range.

[Correction by Alma’s sister, probably Maggie, wife of Deacon Henry K. Delp of Line Lexington.] Your story about Isaiah and father working in the house is not the way father told me. They had a hired girl that was not very well thought of. One day Anna Mary came out to the barn crying to Grandfather and said that the hired girl had been taking a tray of food down to the cellar, and she let the whole tray drop down the cellar steps. Grandfather told Anna Mary, “You go in and tell her to pack up, and someone will take her home. And Joseph, you go in now and work in the house.” Later, Isaiah became jealous, and said Joseph had the easiest job. All the work that Joseph did in a week, he could do in one day [he thought], and then he would go fishing. So grandfather said Isaiah was to work in the house. Father [Joseph] said that Anna Mary and he just kept Isaiah busy from morning till evening. When the week was up, he was glad to go out to the barn to work again. Father worked five years in the house….

My earliest recollections are when, in the fall, the rest of the family were husking the corn from sunrise to sunset. I [Alma] spent the day in a large box placed on the sunny side of a fodder shock. A few toys and a simple lunch were my pastimes.

On my fourth birthday Father went to Lansdale, and my gift on this day was a white toy piano. My favorite tune, played on it often, was “Twinkle, twinkle, little star.”

In the year 1905 Father was ordained to the ministry. I recall nothing of the service. I vividly remember a large group of guests, including the senior bishop Andrew Mack from Berks County. After the first table had finished eating, they sang a hymn. My cousin and I were waiting our turn for the second table.

Another death too young

In 1919 Mother was ill with influenza. This disease had taken many that fall. After several days, the doctor said she was improving. But this Thursday morning he asked Father to step out of the room. “No,” Father replied, “tell us here. This is what we have been living for. Tell us in Mother’s presence.” As tears overflowed in the doctor’s eyes, he said, “She has pneumonia. Her lungs are filling fast. She will live less than twenty-four hours.”

That night after Mother’s passing we knelt around the bed, and one request of father’s prayer was that no pride be shown at Mother’s funeral….

At sixty-seven, father was ordained as bishop. He then told that as a boy he had revelations that he would someday hold these two offices.

Father was a person who enjoyed living. He was human. Serious, yet a man of humor, he had sympathy for others. He loved children. One time while visiting in the home of Bishop Abraham G. Clemmer, he held the tiny granddaughter. Mrs. Clemmer was amazed, saying, “Why Abram never held her yet.”

He [Joseph] had strong convictions for right, and upheld principles even when faced with much opposition.

A few of his often-repeated sayings:
“I never like to see a young person too smart.”
“Any fool can criticize, but it takes a wise man to do better.”
“These are the things which make a death-bed hard.”

And the last three verses of “A Psalm of Life” by Longfellow:

Lives of great men all remind us
We can make our lives sublime,
And, departing, leave behind us
Footprints on the sands of time;

Let us, then, be up and doing,
With a heart for any fate;
Still achieving, still pursuing,
Learn to labor and to wait.

Bishop Joseph G. Ruth was born near Line Lexington, Pa., Dec. 23, 1857; died at his late home near Colmar, Pa., Dec. 27, 1928; aged 71 y. 3 m. 4 d. On Jan. 1, 1884, he was married to Mary Kratz of Hatfield, Pa. To this union were born five children (Maggie, wife of Henry Delp; Emma, wife of Preston Souder; Ella, wife of Wallace Souder; and Horace and Alma at home). These children are all identified with the Mennonite Church. Twelve grandchildren also survive.

The mother was taken away during the influenza period of 1919 and the father after preaching a stirring sermon on Sunday evening, Dec. 23 [1928], was overtaken the following week with a slight attack of influenza, and passed away unexpectedly to his heavenly home. The body was laid to rest on Jan. 1, 1929.

Bro. Ruth is greatly missed in the home, community, and church. He was an active Sunday school worker long before his ordination to the office of minister on Oct. 24, 1905. On Feb. 25, 1926 he was ordained to the office of bishop. His executive ability was felt throughout his bishop district and he could speak authoritatively on any subject assigned to him. He was a deep thinker, a staunch defender of the faith, and zealous in safeguarding the principles of his beloved church. We think of the statement in II Sam. 1:25, “How are the mighty fallen in the midst of the battle.” During the World War, Bro. Ruth served on a committee visiting the [conscientious objector] boys in the camps. He was much concerned about their welfare. He paid many visits to Camp Meade and also visited Camp Dix.

Services were conducted at the home by Bro. Jonas Mininger and at the Line Lexington church by the brethren Aaron Freed and Abram Clemmer. Text, Phil. 4: 8, 9.