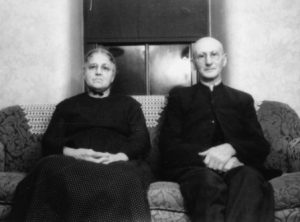 Henry and Mary’s children grew up under the noses of their grand­parents; their grandparents grew old with children constantly under­foot. Mummy Landes took care of the young children while Mom helped in the fields and with the barn work. Ella remembers a scene in which she was being stubborn, ignoring the chores that her mother wanted her to do. Mummy Landes pushed her cane at little Ella and said crossly, “Now macht dich mal ab! (Now get on with it!)” Ella retorted, “Du bist nett my Mom! (You’re not my mother!)”

From Mummy and Doddy Landes the children learned many things. Mummy taught Paul, the oldest child, to hand­sew quilt patches in groups of eight. Eventually, Paul managed to make a whole quilt. Doddy Landes once re­minded Paul to not swing back and forth on the feed entry door, a favorite habit while he was feeding.

The Henry & Mary Ruth homestead on Ruth Road, Harleysville, as an active farm, circa 1916. Photo courtesy of Eleanor Ruth.

With a farm and a market business to be managed, everyone had to do his part. Organization was essential. If Mom had arranged piles of items for deposit in the cellar or upstairs, anyone going there had to take along a load. The family always ate together, no shifts or growing pile of dirty dishes in the sink.

During the winter months the family butchered two or three hogs for market every week. On Wednesday evenings the four older children helped their parents cut up the hogs for hams, bacon, sausage, and scrapple. Pop supervised scrapple and sausage making in the cellar kitchen. He mixed the sausage up in twenty-pound lots. To each lot of finely ground meat, he added six ounces of salt, one and one-half ounces of pepper, and sage to taste. After Mom had cleaned the intestines—a chore she never trusted to childish hands—Pop filled them, using the hand-cranked stuffer that doubled as a lard press.

When Pop stopped going to market, Henry N. Landes, a nephew, borrowed Ruth’s recipe because he thought it would sell well in his market business.

Henry’s granddaughter Eleanor Ruth serving old-fashioned scrapple from the pot at the MHC’s Apple Butter Frolic in 2002. The Apple Butter Frolic, coming up on October 6, 2018, is a family-friendly event to learn about local food, farming and folkways of years past.

Every day the women separated the milk and on Thursdays they churned butter in the large engine-driven butter churn, which was kept in the wood house beside the cave cellar. After the butter was pressed in the cellar kitchen, the children cut and wrapped it. The family also made cottage cheese to sell in market. Mom supervised the children’s packaging operations, making certain that they followed Pop’s rules: to give a good pound for a pound and a good quart for a quart. If Pop discovered sloppily wrapped items when he set up his stall at the market at 18th and Ridge Avenue [in Philadelphia], he’d remind the children to be more careful the next time.

“The Ruth family preferred to eat their scrapple with green spiced tomatoes as a breakfast dish….”

The Ruth’s ate plenty of their homemade scrapple. During the last weeks of scrapple season, which ran from late September to April, Mom always filled a number of apple butter crocks with scrapple for spring and summer use. She sealed them with lard and placed them in the cellar. The Ruth family preferred to eat their scrapple with green spiced tomatoes as a breakfast dish. When the spiced tomatoes were gone, they settled for apple butter. For a breakfast dessert, they always had raised cake that had been made in the oven.

9 pounds green tomatoes
3 pounds brown sugar
1 pint vinegar
1 teaspoon allspice
½ teaspoon cloves
Heat vinegar and sugar to boiling point. Pour over tomatoes and let sit overnight. Remove liquid the next day, heat it to boiling point, and again pour over tomatoes. On the third day, boil everything together for two hours, or until slightly thick. Put in crocks. Cover with an old plate or newspaper. Or, place in jars and seal. Serve with scrapple.

On May 28, 1925, the lot at Salford meeting fell on Henry Ruth and he became the deacon to replace Isaac Clemmer. He served as deacon for twenty-five years. In this capacity he made the congregation’s communion wine. According to some of the bishops, Deacon Ruth’s was the best communion wine. [To learn more about the use of fermented wine during communion, see the Winter 2017 issue of the MHC Quarterly.]

12 quarts blue grapes—washed, with stems picked off
8 pounds granulated sugar
1 pint water
Put grapes in glass container or jug, one with a tight cork. Then let stand from September to April or May. Strain through cloth into clean vessel. (Do not squeeze juice through cloth.) Put into a clean bottle or jar, with a tight cap.

Sometimes church life took precedence over the activities of liveli­hood. Once in the middle of potato planting a funeral had to be attended. To keep ahead of the work and still to attend the funeral, the family went without the noon meal. Everyone planted potatoes furiously all through dinner and then washed up just in time to attend the funeral.

Photo of Salford Mennonite Meetinghouse, circa 1945, marked by a member of the Ruth family: “A place we love”.

When Pop was in market on Fridays and Saturdays, Mom managed the household alone. A favorite Friday night pastime was practicing for singing school. Mom saw to it that the children attended every singing school held in the community. Eddie Nice, the neighbor boy, often came up to practice with the Ruth children. With the children sitting around the table, Mom would teach the soprano part, then the alto, tenor and bass parts, each in turn. She sang each part separately until the child knew his part well. Naturally, the children made mistakes that sent them into giggles of hilarity. Mom was a good teacher. When George Swartley opened a singing school in 1920 in the basement of the Souderton church, Ella was permitted to go, even though she was only 10, two years younger than the minimum age. She could read notes well.

A few soups were favorites in the Ruth household. For summer evenIng suppers, after a hot day in the field or in the kitchen canning, Mom made cold bread soup. In a large bowl, she poured cold milk over chunks of bread. Each person took a helping out of the bowl and ate the soup, while holding a roll of drief beef in one hand. Delicious and so refreshing! Sometimes, as a snack or after illness, Mom made hot pretzel soup. She poured boiling water over pretzels and let them soak. Sometimes more salt was added before the soup was eaten. Another supper food was Bachoffa Schlupper, a kind of shortcake. To make Bachoffa Schlupper, mix one egg with milk, salt, and flour to form a thick paste, Bake until done. Serve with sugared milk.

Bachoffa Schlupper was usually made in the large bake oven that was attached to the summer kitchen, which housed the wood stove and a wood chest. Between the summer kitchen and the eating kit­chen was a pair of wooden doors that kept the heat out of the eating area. Ella remembers baking in the bake oven. After the fire had burned down and the ashes had been pushed down the trap, the oven was filled with as many as twenty pieces. A long-handled paddle called a Bachoffaschip was used to place the items in the hot belly of the stove. Everything—cakes, pies, and bread—had to be ready to go into the oven at the same time. The pieces taking the longest to bake were placed at the back of the oven; custards and pies, which took less time, were placed near the front of the oven.

Mary G. Landes (right) with unidentified friends, circa 1900, prior to her marriage.