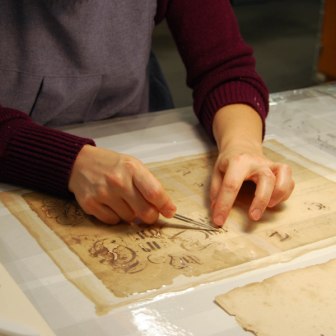 From late 2016 through summer of 2017, a rare 1536 Froschauer Bible and two early fraktur-lettered and decorated family registers from the Mennonite Heritage Center Collection were conserved by professional staff at the Conservation Center for Art & Historic Artifacts (CCAHA), Philadelphia.  The months-long project was funded by a significant grant (MA-31-16-0539-16) from the Institute of Museum and Library Services, a federal agency.  Through this project, our oldest Bible and two of our earliest and rarest family registers have finally been stabilized and preserved.

The 1536 Froschauer Bible from the immigrant Schnebelli-Bachman family has been in the Heritage Center collection since 1990, when it was purchased at auction.  The Bible included a fraktur-decorated register for the Bachman family, made about 1780 by Bucks County schoolmaster and artist John Adam Eyer — this was sold separately at the auction, but also purchased for the Heritage Center.

The Bible was published in 1536 in Zurich, Switzerland by Christopher Froschauer, an early printer of the Swiss Reformation and an associate of Ulrich Zwingli.  One of numerous editions published by Froschauer, this was one of the first complete German vernacular editions of the Bible, and was favored among the Swiss Anabaptists.  For some years, Swiss authorities banned the Anabaptists from using the Froschauer Bible, so they would hide it in their barns and haymows.

It is not known which family originally owned this copy, but in 1696 the Bible was owned and inscribed by Johann “Haans” Jacob Schnebelli, living on the Ibersheimer Hof (farmstead) near Worms, Germany, and probably a Mennonite minister. That year he inherited the book, according to the inscription, from his father-in-law, whose name is not given. In 1708 it was owned by Matthias Schnebelli (likely a son of Hans Jacob), also at Ibersheim, who added an elaborate fraktur bookplate across from the New Testament title page.  That inscription reads: Diese Biebel Gehehret dem Madteiss Schnebelli Auf dem Iversheimer Hoff, und sie ist im Lieb so geschrieben Im Jahr Christi 1708 (This Bible belongs to Matthias Schnebelli at the Ibersheimerhof, and this is written in love in the year of Christ 1708).  The next owners were Anna Maria Schnebelli Bachman (1698-1776; probably Hans Jacob’s daughter) and her husband John George Bachman (d.1753), who brought it with them to Pennsylvania in about 1727, when they settled in Upper Saucon Township, Northampton (now Lehigh) County. It was later owned by their son John George Bachman (1724-1806) and wife Esther Oberholtzer Bachman (1728-ca.1812), who added the lovely fraktur family register by Schoolmaster John Adam Eyer. The Bible passed to their daughter Barbara Bachman Stout (1752-1815) and to her descendants down to J. Kennedy Stout of Washington, DC, in 1914, in whose possession the book was when historian John Baer Stoudt published the Bachman family register through the Pennsylvania Genealogical Society (Publications of the Genealogical Society of Pennsylvania, Vol. V, No. 3, pp 269-270). Click here to view.

Somehow, the Bible apparently later came into the possession of Ferdinand & Matilda Kotzbeck Hetzel of Bristol, Bucks County, recent German immigrants, and of no relation to the Stout family.  At any rate, their grandson Paul Hetzel, who remembered his grandmother reading from it, decided to sell the Bible with the family register at Alderfer’s Auction in December 1990, when its’ existence surprised the Mennonite historical and genealogical community.  The staff and directors of the Mennonite Heritage Center decided they had to try to purchase and save these two treasures, which they were able to do with help from a number of donors.

Twenty-five years later, with assistance from the Conservation Center (CCAHA), a grant application was submitted to the Institute of Museum & Library Services (IMLS), and the grant was awarded.  Actual conservation work at CCAHA began in November 2016.  Work performed on the 1536 Bible was multi-faceted, fairly technical, and time-consuming.  Because the material content of the Bible included paper, wood, leather, brass and textile, several types of conservation needed to be applied.  Work done included mending of tears and losses to particular leaves (pages) with mulberry paper, surface cleaning of the cover and leaves; cleaning, mending and re-attaching the surviving title page; extensive repair and stabilization of the spine; re-adhering loose spine leather and cover leather, and significant repair and restoration to both hinges of the book.  Numerous other steps taken are too technical to mention here.

Schnebelli-Bachman Bible before conservation and after, showing significant repair work done to the book’s spine.

Work done on the two-page Bachman family register by paper conservators at CCAHA included mending of tears and losses with mulberry paper, surface cleaning of the paper, stabilization of the media, and “washing” on a suction table with a spray solution of deionized water and ethanol.  The family register was then hinged using wheat starch paste to a window mat of 100% ragboard.

In 1995, as curator at the Mennonite Heritage Center, I learned of the existence of another early family Bible, this one a first edition Saur Bible (published 1743 in Germantown by Christopher Saur), with a family register made in the early 1760s for Mennonites Henry and Barbara Stauffer Sauter (Souder), of Hatfield Township, Philadelphia (now Montgomery) County.  The Bible was then in the possession of a book collector in Lancaster County — I learned it had been sold on an Amish household auction a couple of years before.  I was shown photos of the beautiful family register in the Bible, realized its importance and that it originated in Montgomery County.  After contacting the owner of the Bible, I found that he was willing to sell it!  He was not a descendant of the Sauters, but had bought it because he wanted a Saur Bible.  Local donors agreed to put up the funds to purchase the volume and I went and bought it!  The donors, Henry & Charlotte Rosenberger, eventually donated the Bible to the Mennonite Heritage Center.  How did this Bible, from an early Mennonite family in Hatfield Township, end up in an Old Order Amish family in Lancaster County? I would soon find out.

The family register begins with the record of Henry Sauter (1722-1811) and Barbara Stauffer Sauter (1724-1791) and of their immigrant parents (not documented anywhere else), written in an elaborate fraktur lettering from the early 1760s.  The register also records the births (and a couple deaths) of Henry and Barbara’s children, from 1746 to 1770. The scrivener remains unidentified, but was probably a schoolteacher in the Hatfield Township area.  Henry Sauter was a founding trustee and early deacon of the Line Lexington Mennonite congregation, but later moved his family from Hatfield Township to East Whiteland Township, Chester County in about 1773, where at least two of his daughters married into Amish families. Daughter Susanna married Christian Fischer, and the Bible passed to them. With its family register, it was then passed down among the Amish descendants of Susanna Sauter Fischer in Lancaster County, always to a daughter named Susanna or Susan, until the early 1990s when it was owned by Susan Lapp.  It was sold at her household auction in Lancaster County in 1993. A transcription and translation of the record can be found in MHEP Newsletter, Vol. 21, No. 1 (January 1994).

Two pages of the Sauter family register before treatment.

The same two pages after treatment.

Some of the pages of the family register had numerous ink losses, were quite fragile, and needed conservation.  In 2015, we decided to include this family register in the grant proposal submitted to IMLS.  Work performed by conservators at CCAHA included surface cleaning of the paper, stabilization of the media, washing of each leaf with a solution of deionized water and treatment to prevent further ink deterioration.  Paper losses were filled with antique laid paper, and each leaf was lined (front and back) with thin mulberry tissue and wheat starch paste.

With conservation completed, the 1536 Bible and the two family registers were returned to the Heritage Center in early September 2017, and are now on exhibit.  Thanks to the IMLS grant and the careful work of the CCAHA, these three rare artifacts are at last in a good state of preservation.