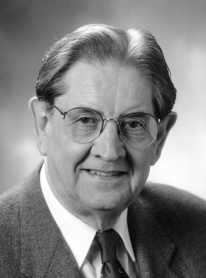 Paul M. Lederach (1925-2014) was born in Norristown, PA, the oldest son of Mennonite mission workers. After high school, he studied at Goshen College, Eastern Baptist College and Southwestern Baptist Seminary. Paul was ordained a minister in the Franconia Mennonite Conference in 1944 and a bishop in 1949. From 1952 to 1978, he was associated with Mennonite Publishing House, Scottdale, PA, in several roles, and from 1978 to 1985 had an insurance business in Scottdale. Paul returned to the Franconia Conference in 1986 and became pastor of Franconia Mennonite Church. He was later chairman of the Conference overseers and served interim pastorates at Zion Mennonite Church, Souderton, and Plains Mennonite Church. He was married to Mary Schlegel Lederach and had four children.

These memories were published in the MHEP Quarterly (Summer 1999) as part of a series “Remembering the 20th Century.”

After graduating from Norristown High School in 1942, I left Norristown for Goshen, Indiana, to attend college. In my junior year, Markley Clemmer requested pastoral help at Norristown. The Conference authorities granted his request. An ordination by lot was arranged for August 1944. The news that I was named as a candidate for the lot came to me as a total surprise. I was requested to meet with the bishops for an examination to see if I qualified for the lot.

The examination did not go very deeply into theological matters. Two things stand out vividly in my memory. I was asked whether I would wear a plain suit with a frock tail and a hat if I were ordained. I agreed to do so. In turn, I asked whether I would be permitted to finish my education were I ordained. The bishops granted that request.

The ordination was held at Norristown, August 6, 1944, with Warren Bean, bishop in the Western District of Franconia Conference, officiating, assisted by Amos Kolb. [The other men “in the lot” were Harold Weaver and Ivins Steinhauer.] I remember little of the ordination service, except that I selected the Bible with the slip of paper on which was written the verse: “The lot is cast into the lap; but the whole disposing thereof is of the Lord.” Proverbs 16:33.

I was ordained immediately. In retrospect it’s hard to imagine that I would have been ordained were it not for the lot. I was very young [19 years old]. I did not wear plain clothing (I was ordained wearing a black necktie). I was unmarried. I was a Goshen College student. I had been out of the area for two years. Could such an ordination take place today?

I continued my education, finishing a BA and ThB at Goshen, then going to Eastern Baptist [now Eastern University] in Philadelphia, and then to Southwestern Baptist [Seminary] in Fort Worth, Texas, to complete a doctorate degree in 1949. I am grateful to Markley Clemmer and to the bishops for their patience letting me continue my school work.

“Conference was a somber and solemn occasion…”

As an ordained minister in the Franconia Mennonite Conference I was expected to attend the spring and fall sessions of Conference. At that time they were held the first Thursday of May and of October. Conference was a somber and solemn occasion. All were dressed in dark plain suits. The handshake greetings were accompanied with the holy kiss. Conference involved the deacons, minister and bishops. There were no lay delegates. A few interested laymen attended. Quite a few wives of the ordained men also attended. They sat to the rear of the Franconia Meetinghouse. Conference always assembled at Franconia. There were usually a number of visiting ministers and bishops from other Conferences, especially Lancaster.

There was always a noon meal. The menu of these meals has remained constant over fifty years — bread, butter, cold cuts, potato chips/salad, pickles, cut fruit, cake, water and coffee.

The bishops met prior to Conference to prepare the agenda and to write the recommendations on which the Conference body would act. Although there was freedom to discuss, usually the proposals were adopted without much modification.

In the Franconia Meetinghouse there was a long, white paneled pulpit. The bishops sat on a bench in front of the pulpit, facing the ordained body. The bishops sat in order of seniority, with the senior bishop seated on the side toward the highway, the bishop with least seniority at the end of the bench toward the cemetery.

There was singing of hymns. There was scripture reading and prayer. Then the business began. There were reports. There were actions. The secretary of Conference sat at a table to the front of the auditorium on the cemetery side. In later times there was a Conference sermon. (That began after I left eastern Pennsylvania in 1952.) At times discussions were intense. I remember the Conference (1947) when the Discipline was revised — especially the section dealing with dress. At times there was humor, but this did not sit very well with some of the bishops. One cautioned the assembly, “Brethren, there is too much levity.”

What a change a half century makes! Now (1999) Franconia Conference meets at different times of the year, for longer periods of time, with lay delegates, many kinds of music and worship forms, and a wide variety of ways to come to grips with issues and to take action. Nevertheless, now as then, the final action at Conference still is: “We affirm our desire to continue in and witness to the nonresistant and simple faith in Christ, looking for the blessed hope, and the glorious appearing of our great God and Savior, Jesus Christ.”