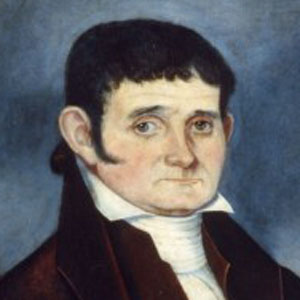 The Mennonite Rosenberger family is descended from Henry Rosenberger who came to Pennsylvania with wife (name unknown) and sons Daniel and Benjamin in 1717. He settled, probably the following year, on land in the heart of what became Franconia Township, buying that land from James Steele in 1729, along with neighbor Christian Moyer Jr.  Together, Rosenberger and Moyer donated land for the Franconia Mennonite Meetinghouse and Cemetery. The old meetinghouse (now fellowship hall) is on land that was Moyer’s, and the cemetery and current meetinghouse are on land that belonged to Rosenberger. No deeds survive for the transfer of property to the congregation, but the tract was removed from future deeds, and at the church’s 275th anniversary observance in 2004, Rosenberger’s original deed of 1729 was gifted to the congregation in a symbolic gesture.

Henry came from Germany (one tradition suggests Zweibrücken in the Palatinate), though his roots were certainly in Switzerland, where Rosenberger’s were listed as Anabaptists in Schleitheim circa 1600 and Birmensdorf fifty years later.

Here in Pennsylvania, we assume Henry’s wife died and he married again, as he had two more sons in the 1720s, John and Henry Jr.  He may have also had daughters, but nothing is known of them. Between his four sons, Henry had many descendants, some of whom were quite prolific. For example, his grandson David Rosenberger (ca. 1749-1829) had 75 grandchildren and hundreds of great-grandchildren.

Franconia and the Swartley branch

The Franconia farm went to the immigrant’s youngest son Henry Jr. (1726-1809), who served as a deacon in the Franconia Mennonite congregation, assisting neighbor Christian Moyer. He married Barbara Oberholtzer, and they had six daughters and no sons (two boys died as infants). The two youngest daughters, Magdalena and Sarah, married brothers named John and Philip Schwerdle (Swartley).

John Swartley came to work as an indentured servant on the Rosenberger farm in 1774, and gaining the favor of the family, he married Magdalena in 1777 when she was just 18 and he was 24. According to family tradition, their wedding supper was interrupted by soldiers of the Continental Army foraging for food. The family invited them to join the wedding supper, after which the soldiers seemed satisfied and wished the newlyweds happiness. A few years later, Jacob and Magdalena arranged for his 18-year-old brother Philip to come to Pennsylvania and marry her 18-year-old sister Sarah. And so Henry Rosenberger Jr. had many descendants named Swartley, but none named Rosenberger except by marriage.

Jacob and Elizabeth Swartley Rosenberger, at their home in Franconia Township in the 1880s. Elizabeth was one of the few descendants of deacon Henry Rosenberger who did have the name Rosenberger, because she married a descendant of his brother John. Mennonite Heritage Center Collection; gift of Isaac Clarence Kulp.

Two of the earliest known portraits of local Mennonites are from the Swartley family. These 1837 portraits by William Bonnell, of John Swartley Jr. (son of the John and Magdalena Rosenberger Swartley) and wife Catherine Delp, give a rare glimpse of the dress and appearance of local Mennonites in the early 19th century. The paintings went with a granddaughter to Platteville, Wisconsin, where they are now displayed in the Rollo Jamison Museum.

A relic of the family that remained in the local area, and is often on display at the Mennonite Heritage Center, is this wooden dateboard from the house built by John Swartley in 1809 on the old Rosenberger homestead, Franconia. Magdalena had died in 1808, but she was remembered with a small “u. M [und Magdalena] in the middle of Schwerdle’s name.

Another artifact that can be seen at the MHC is this New Testament printed by Christoph Froschauer at Zurich, Switzerland in 1528 and presumably brought to America by immigrant Henry Rosenberger. It contains an inscription in very poor handwriting signed “Bentz [Benjamin] Rosenberger”, the younger of Henry’s two sons born in Europe.

A lengthy inscription in the front of the book is signed “Dies hab ich geschrieben an 3 dag Mertz anno 1732 Bentz Rosenberger [I wrote this on March 3, 1732, Benjamin Rosenberger]”.

Amazingly, this book was found by late MHEP librarian Wilmer Reinford in 1971 in a trash heap at a Bucks County antique store. Recognizing it as one of those rare items brought to this country by a Mennonite immigrant, Reinford bought the book for a mere $1.50 or $2.50 and donated it to the Mennonite Heritage Center. It is one of only three Froschauer books in the MHC collection.

A grandson of Benjamin, also named Benjamin Rosenberger (1769-1813) married a granddaughter of immigrant John Biehn of Rockhill, and they moved with her family to Ontario circa 1800, where they were some of the first settlers of Waterloo County, and began a line of Rosenberger’s among the Mennonites of Canada. They were joined 20 years later by his brother Jacob and wife Polly, and sister Susanna and her husband, Funkite-Mennonite minister Jacob Detweiler. The new arrivals settled at a place later called Roseville, presumably because Jacob Rosenberger sold the first village lots off of his farm (Reg Good, Detweiler’s Meetinghouse: A History of Mennonites near Roseville, Ont., p. 8).

In 1855, the pioneer Mennonites of Roseville built a stone meetinghouse in the style of those they had known in eastern Pennsylvania. Called Detweiler Meetinghouse, it is the only surviving stone Mennonite meetinghouse in Ontario. Though no congregation remains, the meetinghouse has been beautifully restored and is used for events and historical interpretation.

The Rosenberger family has been prominently associated with Hatfield, Pennsylvania since the township’s founding in 1743. The immigrant’s oldest sons, Daniel and Benjamin, settled there in 1740, and by 1749, son John moved there as well. John’s property included much of what is today Hatfield village on the north side of Main Street. Daniel and Benjamin’s land was on the northeast edge of the township, along the Bethlehem Road.

Close to Daniel and Benjamin’s land is Frick Meetinghouse, Burial Ground and Native Sanctuary, the earliest Mennonite cemetery in Hatfield-New Britain (older than Line Lexington and Plains), and a center of Anabaptist faith connected not only to Mennonites, but also to Funkites, Church of the Brethren and Brethren in Christ. Rosenberger family members from each of these groups have been key in the use and maintenance of the site over 250 years.

The current meetinghouse was built in 1882, replacing an older meetinghouse built circa 1815. The earlier house was used by Funkite-Mennonites of Hatfield Township for worship until the group disbanded in the mid-19th century. The Funkites (including Rosenberger’s) filtered back into local Mennonite churches, the Church of the Brethren at Hatfield, and Brethren in Christ at Silverdale. The current meetinghouse was never used for regular Sunday worship, but for funerals and later for interdenominational Anabaptist “reunions”. The story of its preservation is fascinating, and credit must be given to the Rosenberger family for how they took the site under their wing, both spiritually and financially.

In a small pamphlet, conservationist Abram Rosenberger told the story in 1944:
It is said that David Rosenberger [1825-1903] of Unionville, was the last original member of the “Funkites” buried at Fricks in 1903. At his death he was a member of the Church of the Brethren and he left some money for maintenance. The writer was a young man and lived neighbor to the deceased. According to custom, I assisted in taking care of the horses of the relatives and friends [at the funeral]. This is my first recollection of “Fricks”. I remember the text and some of the sermon. Later I discovered that some of my relatives were buried there. I saw the cemetery as uninviting and neglected.

I cannot tell if these impressions had anything to do with my interest later, but in 1941 a strong urge or conviction came upon me to see the place restored. I had no knowledge of its history or background. But I began to inquire, and search…. Early in 1942 I approached the present trustees, Henry F. Rosenberger of Souderton, and Raymond H. Rosenberger of Hatfield, son and grandson of Bishop Henry Rosenberger and Mary Rosenberger (nee Frick). With their consent and support the building was cleaned, repaired, and a call issued for a reunion on August 16, 1942. The response was beyond expectation, the offering liberal, and the interest encouraging. A community song service was held in August of the same year….

Untouched by modern embellishments “Frick’s Church” and location is unique. Situated one-fourth mile off the main road on a branch of the Neshaminy, it has remained unnoticed and unknown, fascinating in its primitive simplicity…. Nature assists by lending its charms to the scene. On the east, the cemetery gradually slopes to a sharp decline, where beneath stately trees and climbing vines the Neshaminy nestles and winds its way seaward less than 150 feet from the Church door.

One may go there during the summer months and in undisturbed meditation, enchanted by the music of the rippling stream, the morning and evening songs of the birds almost bursting from their throats in their desire to glorify God. The stately maples casting their shadows, long and deep, across the cemetery, remind us of the shadows and sorrows of life which are often long and deep. And in the stillness of the hour, our hearts yearn for that eternal peace and rest which the “Son of God” alone can give. And now the twilight falls and the sun sinks surrounded by a halo of glory, and this, too, speaks that our sun is going down and what is our hope in the resurrection. For there is a morning, when every green tent pitched above a sleeping saint shall part, and they shall come forth to meet the Lord (and each other) in the air….

This beautiful place is still a retreat and sanctuary in 2017, thanks to the work of the Rosenberger family. Set back from Orvilla Road, and connected to local parkland by a walking trail, visitors can walk through quietly or sit and meditate and listen to the birds sing.

Frick Meetinghouse and Sanctuary is one of the finest legacies of the successful Rosenberger Dairy and Cold Storage businesses that were operated by descendants of William Frick Rosenberger in Hatfield Township during the 20th century. This family has dedicated funds and many hours of work into caring for the property over the years. They have set up a 501(c)3 organization to ensure that the meetinghouse and land are preserved in the future; you can read more and see pictures on the association’s Facebook page.

Sources on the Rosenberger family

Fretz, A. J.  A Genealogical Record of the Descendants of Henry Rosenberger of Franconia, Montgomery Co., Pa.  1906. Online at https://archive.org/details/genealogicalreco00lcfret

Fretz, A. J.  A Genealogical Record of the Descendants of the Swartley Family of Bucks and Montgomery Counties, Pa.  1906. Online at https://archive.org/details/genealogicalreco01lcfret

Rosenberger, A. C.  History of Frick’s Church. 1944. Available in the MHC Library.

Ruth, Phil. In Their Generations: A History of the Rosenberger Family in the Vicinity of Hatfield Township. Pennsylvania. Souderton, PA: Ploughman Publishing, 1992.