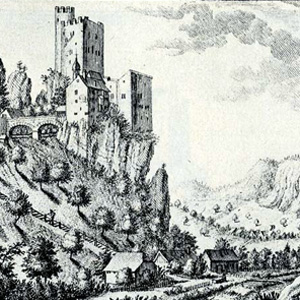 The Derstine family of eastern Pennsylvania (one branch uses the spelling Derstein) is descended from Michael Dierstein (1712-1777), an immigrant who came to Philadelphia with a group of Mennonites on the ship Samuel in 1732. He was unmarried at the time, and worked as a weaver. In Pennsylvania, he became a miller.

Michael left behind a widowed mother and siblings, who were members of the Mennonite congregation at Hasselbach near Sinsheim, Germany. Like the other members of that congregation, the family’s roots were in Switzerland, where Mennonites named Thierstein have lived in the vicinity of Bowil, Bern, for centuries. A descendant of this family, John R. Thierstein, was a professor at Bethel College (North Newton, KS) and editor of The Mennonite, official organ of the General Conference Mennonite Church, during World War II.

The deep roots of the Thierstein/Derstine family may be in the noble family of Rudolf de Dierstein, first Count of Thierstein (fl. 1082). From the 11th to 16th centuries, the Thierstein family ruled much of northwestern Switzerland, where there is still a Thierstein District in Canton Solothurn and the ruined castle of Neu-Theirstein at Büsserach.

Michael Dierstein brought with him from Europe an “old Bible” that was bequeathed to son Abraham in his will. Later descendants saw and held this Bible as recently as the 1890s. According to them, the book contained family records as far back as 1490 and some mention of noble ancestors. Unfortunately, the Bible was lost or destroyed after the death of the last known owner, John Dierstein (1828-1901) of Elmwood, Ontario.

About a year after his arrival, Michael married Agnes Kolb, probably at Skippack where her father Jacob was deacon of the Mennonite congregation. At the same time, Michael and Agnes bought from her parents a tract of 217 acres in Bucks County, at the intersection of present-day State Road (Rt. 152) and Keystone Drive, West Rockhill Township.

Within a few years, Michael built a mill – the first mill in central Bucks County. It has been replaced a couple times, but the mill of 1830 still stands next to “Mill Creek” on the old Derstine homestead (visible from Keystone Drive). The house is newer, built in 1897; but the datestone from the original “mansion” (i.e. substantial house) built by Michael in 1748 is preserved in the current house. Descendant John Derstine Souder drew a copy of the datestone on this photo of the homestead circa 1895. The house is mostly hidden by trees; and with all the logs lying around, clearly a saw mill was still in operation at the time.

Today the property is owned by De Gruchy’s Lime Works, a masonry supplier.

In 1737, Agnes’ brother “Strong Isaac” Kolb purchased land adjoining the Derstine farm. Together, Isaac and Michael became leaders of a growing Mennonite community in Rockhill. Isaac was chosen as minister in 1744 and Michael as deacon before 1767 (perhaps long before). Whether or not the lot was used, once again we see members of the same family being chosen for church leadership.

The Derstine family has been prolific in numbers, producing strong and numerous descendants who lived, on the whole, quiet and happy lives in the Mennonite community of eastern Pennsylvania. Several Derstine artifacts and images from the Mennonite Heritage Center collection capture this quiet rural life.

This fraktur by John D. Souder, made on his 75th birthday, March 4, 1940, commemorates his ancestors Michael and Agnes Derstine with a depiction of Agnes, perhaps, at her spinning wheel; a stanza of “My country, ‘tis of thee” in German and English; and a reassuring passage from Micah 4:4, “And they shall sit every man under his vine, and under his fig tree; and none shall make them afraid; for the mouth of the Lord of Hosts hath spoken it…and we will walk in the name of the Lord our God for ever and ever.” The grape arbor under which Agnes sits contains a blessing in German: “The Lord bless thy going out and thy coming in.” Gift of Irene Keller Goshow (1987.41.1)

The name Noah was uncommon among Pennsylvania Mennonites, but it occurred at least four times in the Derstine family. This family register is for the earliest of the name, Noah G. Derstine (1837-1902). He married Susanna Bergey and lived in West Rockhill Township, near the old Derstine homestead. The register was lettered by Jewish calligrapher Martin Wetzler, who signed it in Hebrew and added a few Stars of David for decoration. An earlier inscription was made, probably by Noah himself as a 16-year-old boy, when he received this book containing writings of Menno Simons. He may have been more familiar with English than German at the time, as he wrote in English script and misspelled his name “Dirstien” rather than “Dirstein”. Gift of Claude and Naomi Derstine Shisler (1989.13.3).

Noah’s son, James B. Derstine (1876-1961) was postman for Souderton until World War I forced him to quit the job. As a U.S. postman, he would have been required to sell war bonds, an activity forbidden by the Mennonite Church; so he took up marketing instead.

James was a song leader at Rockhill Mennonite Church, and was interviewed in old age by Isaac Clarence Kulp about Mennonite church music. The notes of that interview are in the I. C. Kulp Papers at the MHC, and you can hear James sing 19th-century Mennonite hymns and share memories in Pennsylvania Dutch on this circa 1960 recording from the Kulp Collection: Click here.

James B. Derstine, circa 1935, with wife Katie and daughters (left to right) Kathryn, Hilda, Susanna and Naomi, at their home on Main Street, Souderton.

This classic American scene, almost straight off the cover of Saturday Evening Post, is the family of Norman and Ellen Derstine Rittenhouse celebrating Thanksgiving in Towamencin Township, 1955.

Rufus Derstine cultivating corn on his Towamencin Township farm, circa 1965.

Other Derstine’s lived not so quietly.

There is a family trait of confidence and boldness that empowers some descendants to chart a course uncommon and make noticeable impacts. One descendant’s biography is entitled Following the Fire. That’s a fair description of the impulse some Derstine family members have to step out in courage and follow a personal call or conviction, regardless of community approval.

One historian of the middle ages—a woman, Alicia Moore, in 1846—wrote of the Thierstein family and their role in the 15th-century “Nuns’ War” at Klingental Abbey in Basel, Switzerland. Prioress Anne of Thierstein—“who inherited all the spirit and address which distinguished every individual of that noble family”—locked the doors of her convent on the Dominican monks who had always exercised authority over the nuns. Thereafter, the “ladies of Klingenthal” (many from noble families) managed their own affairs, with the support of the Bishop of Constance. It is said that Lady Anne “could not bear the sight of a Pfaffenplatte,” shaved crown of a monk’s head. Moore also notes that in the Thierstein family, “the list of Tochtern Klosterfrauen [daughters joined to the cloister], is far longer than that of sons devoted to the seclusion of a monastic life, probably from the valorous spirit of the family, more willing to carve out fortune with the sword than seek it under a cowl.” (Historical Pictures of the Middle Ages, 70-75).

In recent years, Mennonite Derstine women have pioneered in church leadership. Sue Clemmer Steiner, born in Souderton, PA, whose mother was a Derstine, became one of the first women ordained to the Mennonite ministry in Ontario, Canada in 1986.  Another Ontarian, Grace Derstine Brunner, pioneered in the area of husband-wife-team pastoral work. With husband Paul, she provided leadership for several Mennonite congregations across the United States.

Grace’s father, Clayton F. Derstine (1891-1967), early followed the fire of an internal call to ministry. He began teaching Sunday School just two weeks after being baptized at Souderton Mennonite Church in 1911. His zeal for evangelism and Fundamentalist ideas were too much for the traditional Souderton/Franconia community, and he moved to Altoona, PA, where he was ordained a minister in 1914 and bishop in 1921. Ultimately, he was called to pastor the First Mennonite Church of Kitchener, Ontario, where the congregation quadrupled in size under his leadership. In Franconia Conference, however, he was forbidden to preach until 1932 when limited permission was given that he could preach at Souderton “when he is home visiting his folks” (Franconia Conference Resolutions, Oct. 6, 1932).

A cousin, Gerald G. Derstine (b. 1929), also felt a call that set him apart from the mainstream, and it’s his biography that is entitled Following the Fire. In 1955, Gerald was serving as pastor of a rural Mennonite mission in Minnesota when he experienced the baptism of the Holy Spirit (speaking in tongues) and was converted to Pentecostal faith. This witness was largely unwelcome at home among Mennonites of Franconia Conference, but Derstine found many open ears in other communities and developed an evangelistic ministry, Gospel Crusade, Inc., and Christian retreats in Minnesota and Florida.

A Derstine descendant who found success in ministry among local Mennonites, even as he encouraged progressive change, was David F. Derstine (1924-2006). Serving the Blooming Glen Mennonite congregation from 1951 (when it was recovering from a painful conflict) until 1976, Derstine was the first salaried minister in Franconia Mennonite Conference and one of the first to wear a lapel coat and long tie, rather than the traditional plain coat. He oversaw a remodeling project that added pillars to the front of the church, a cross behind the pulpit, and a prominent steeple, all non-traditional for Mennonites.

There were Derstine’s who stood out as conservative also. In 1958, minister Elwood D. Derstine (1895-1979) of Franconia Mennonite Church led a group of conservatives in the most significant schism among local Mennonites since 1847. Inspired by his outspoken leadership, members formed several small congregations which sought to preserve Mennonite faith and practice as it was in the 1950s. Today they have merged into one, the Indian Creek Mennonite Church, whose brick meetinghouse and school buildings stand next to the sprawling Franconia Mennonite meetinghouse, a quiet protest against innovations accepted by the majority of local Mennonites in the last half century.

Another group embraced Evangelical-Fundamentalism. Several Derstine’s helped to organize Grace Bible Church, Souderton and Calvary Church of Souderton (originally Calvary Mennonite Church) in the 1940s and 1950s. One of these was Jonas L. Derstine (1883-1951), who owned the large dispensational chart below. He was raised in the Souderton Mennonite congregation and taught Sunday School there. Eventually, his teaching privileges were revoked because of his dispensational theology, and he became one of the first members of Calvary Church.

Sources on the Derstine family

Derstine, Brendon. “Side by Side: A Schism, Lawsuit, and Irreconcilable Differences in the Franconia Mennonite Church.” Unpublished paper, 2012. Available in the MHC library.

Steiner, Sue Clemmer. Flowing with the River: Soundings from my Life and Ministry. Self-published. 2013.