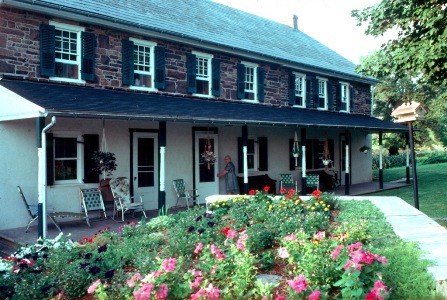 Immigrant Gerhart (or Garret) Clemens (b. 1680) was among the first settlers of Lower Salford Township. A vinedresser and weaver from Nieder Flörsheim, Germany (just up the road from the Kriegsheim home of the Cassel family), he came to Pennsylvania in 1709 with wife Anna Reiff and sons Jacob and John, settling at Skippack. By 1726 they had moved to Salford and purchased 300 acres on the East Branch of the Perkiomen Creek, where Gerhart built a gristmill. The mill would prove quite successful through succeeding generations. Today, it is remembered in the name of a road and park — Groff’s Mill. The Groff family were the last to operate a mill at this location, closer down to the road.

The location of Clemens’ mill is marked on this satellite image. A newer structure has been built on the foundation of the original mill. It is on private land and not visible from the road.

When the immigrant divided his land to his children, he owned close to a thousand acres. The farm that went to his eldest son Jacob (1703-1782) became significant to the Salford Mennonite congregation, which for a time was known as “Clemens’ Meeting”. As a young man, Jacob Clemens likely helped to build the meetinghouse, and in later life he served as a deacon there. His nearby stone farmhouse, expanded over the years, was also the home of his great-grandson, Salford minister Isaac K. Clemens (1813-1895), and of another Salford minister Elias N. Landis (1897-1957).

It was in the attic of this house that the account and dowry book of the Clemens family was preserved, containing records and valuable information about family life and inheritance patterns from 1749 to 1857. The book resides today in the Mennonite Heritage Center collection. In 1975, it was transcribed and translated by local historians Raymond Hollenbach and Alan Keyser and published by the Pennsylvania German Society, granting a rare window into 18th century local history. For instance, on December 1, 1753, Jacob Clemens wrote “my brother-in-law, Feldie Klemmer, who lives in Great Swamp, borrowed 10 pounds from me, to be repaid next May fair (or fare),” providing us with the identity of Jacob Clemens’ wife and the residence location of Valentine (Felty) Clemmer. The word “fähr” is a German phonetic spelling of an English word (either “fare” or “fair”) that meant either payment upon invoicing or possibly a calendar event — a “May fair” of some kind (perhaps May Day).

This is the entry described. As in all account books, the note was crossed out by Jacob Clemens after the debt was paid.

A couple interesting pieces of fraktur from the Clemens family have survived to puzzle and delight us. The first is a Vorschrift (writing model) made for John (Johannes) P. Clemens (1802-1884), a grandson of deacon Jacob, by schoolmaster Jacob Hummel in 1816 at the Salford Mennonite meetinghouse school. The green color included in some of the large letters is unusual, and even more unusual is the large heron-like figure with a human face and crown beneath the capital D. Such a magical-looking creature might not be expected in the art of pious country farmers, but teacher Hummel — himself probably of Lutheran background — effectively used the image to inspire young John to meditate on a text about guardian Engel (angels).

Mennonite Heritage Center Collection; acquisition made by possible by a gift from Hiram and Mary Jane Lederach Hershey and the Lederach family (2015.37.13).

More on the puzzling side — but equally beautiful — is a drawing (below left) by Abraham Clemens (1790-1867) for his niece Catherine Hunsberger of Hilltown Township in 1825. In that year, Abraham moved with his family from Bucks County to Ontario. The text of the fraktur reads: “This beautiful picture, a gift of honor from my cousin Jacob Klemens, belongs to me, Catharina Hunsberger, in Hilltaun, 1825.” The puzzle is that Abraham’s son Jacob is thought to have died as an infant in 1818. And the style of drawing suggests creation by the father, Abraham Clemens, who made similar fraktur in Ontario. The drawing was likely given to Catherine to remember Jacob, either because the baby had died or because a cousin whom she loved was moving hundreds of miles away to Canada.  Mennonite Heritage Center Collection; gift of Vernon & Blanche Godshalk Althouse (1988.38.1).

A modern fraktur by artist Roma Ruth (below right) for a descendant of the Clemens family bears similarity — a heart and tulip design, though beautifully different and incorporating grapes, ferns and cedar trees to further illustrate the theme of planting. This fraktur was made for Ernest Clemens, a founding supporter of the Mennonite Historians of Eastern Pennsylvania, in 1995.

Most local people know of the large corporations built by the Clemens family in the 20th century — Hatfield Quality Meats and various spin-offs under the umbrella of the Clemens Family Corporation; and Clemens Markets Inc., which until 2006 operated 20 supermarkets across southeastern Pennsylvania. But you may not have heard the story of Marcus Clemens and the Ridge Hosiery Company that he operated with a few partners near Quakertown from 1948 to 1955.

in his twenties, Marcus A. Clemens (1916-2008) succeeded his father-in-law, Clayton Gotwals, as a Director of Granite Hosiery Mills in Souderton, though he did not work there until years later. He was drafted and served a year of alternative service as a conscientious objector.

After his service, Marcus set out to organize his own hosiery company above “the Ridge”, near Quakertown, where he and wife Helen were involved in the Rocky Ridge Mission of Franconia Mennonite Conference. The reason was two-fold. Granite Mills did not have the equipment or interest to produce seamless stockings, which by the late 1940s were beginning to overtake seamed stockings in popularity. Marcus and his partners saw this opportunity for business growth, but they also hoped to provide non-Union employment and support for members of the Rocky Ridge Mission.

Both goals were achieved, and within a few years the business was off to a booming start. So much so that it attracted purchase inquiries from a New York firm, the Van Raalte Company. Not wishing to sell, but impressed by the big city interest, Clemens and partners agreed to name a price they thought would be excessive. It was accepted, however, and Clemens felt obligated to sell. Not surprisingly, Van Raalte closed the factory and shipped the machinery south. But for a few years, this unique industry/mission symbiosis had flourished under the vision of Marcus Clemens, contributing (alongside other Mennonite businesses like Moyer’s Chicks) to solid footing for a Mennonite congregation in the Quakertown hills that continues to this day.

The expanded staff of 1954, the year before the company was sold.

Seamless knitting machines were purchased from a factory that closed in New Hampshire.

Henning’s Market — large, independent, and family-run (a rare find these days) — began as a humble general store operated by the daughters and sons-in-law of Henry Clemens Delp. Located at the corner of Main and Broad Streets in Harleysville, the store was managed by Garret and Jane Delp Nice from 1899-1909, and then by Menno and Ella Delp Clemens. Their daughter Ella Mae married Warren Henning, and they expanded the store into a supermarket across the street in 1952, and after 1974 in a large shopping center east of town.

The current store, and Clemens’ original sign on display in the store offices.
Image courtesy of John Ruth.

The photos below show retired store owners Menno and Ella Clemens (seated) with her sisters and their husbands circa 1940. Each person is in the same position as their spouse: (left to right) Garret & Jane Nice, Menno & Ella Clemens, Isaiah & Kate Cassel. All were members of Franconia Mennonite Conference congregations, at the height of dress discipline in the conference; yet one can see the subtle diversity that was present at the time.

Garret and Jane, the oldest, are dressed most conservatively (he was treasurer of the conference Mission Board). Menno makes a nod to tradition with a bow tie rather than modern long necktie; Ella’s covering strings are completely untied. Kate wears a continuous covering string (though not tied tightly under her chin), while her husband (a Harleysville businessman) wears a long tie. These slight differences, almost imperceptible to outsiders, meant something in the Mennonite community, where strings and ties represented levels of commitment to tradition and separation from the world.

Sources on the Clemens family