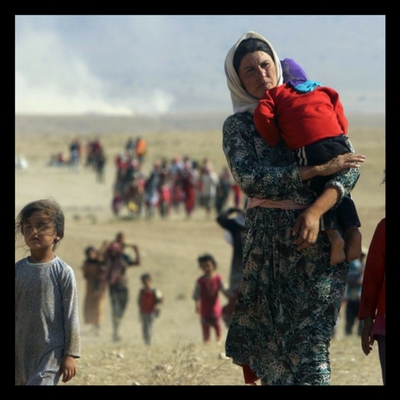 On Friday evening, April 28 at 6:30 p.m. we will hold our Heritage Banquet as a limited-seating dinner at the Heritage Center. Recent immigrants will share their stories, faith, and food, alongside of “Frederick Alderfer” an 18th century immigrant who will revive and present his story in our new exhibit.  Tickets are $117 and funds raised will benefit the work of the Heritage Center and the communities of our visiting friends.

To reserve up to two (2) tickets, please CLICK HERE.

With the help of Franconia Mennonite Conference leaders and Keystone Opportunity Center, we have been meeting and interviewing recent “in-migrants”.  They have inspired us with their bravery and hope.  You can hear some of their stories by attending on April 28th or by seeing our new exhibit opening on April 1st—Opportunity and Conscience:  Mennonite Immigration to Pennsylvania.

Here is a sampling of what they told us:

“I came to the USA from Honduras in 2004. I came to New York to live. A couple weeks after that I moved to Souderton. Life is not easy here when you do not speak the language. I came here to help my family financially because my father is poor and my family is big. I have five brothers and three sisters. Traveling from my country was hard and very dangerous because I needed to cross two countries, Guatemala and Mexico. One month after leaving my home, I finally was at my destination. The first year was very hard and sad because I missed my mom and son a lot. Sometimes I felt very frustrated because a couple times I lost my job. I have a couple brothers living in New York, but I like living in Pennsylvania. I do not like New York because it is hard to find jobs and I do not like living in the city. All this time I haven’t seen my mom and son and a couple of brothers for 13 years. I hope to see them soon. Life in this country is not easy but is better than in my country.”

“I was working in a special program named ‘broon y vida nueva’, which means ‘erase and new life’. This was a beautiful program helping people to leave the gangs, organized crime and drug cartels. We were a program that erased the tattoos and found new ways for these people to earn money to live as a small enterprises or small business. The tattoos in gangs and organized crime are codes to identify status and information and symbol of membership. To remove the tattoo means to quit or leave the organization, this is an act paid with death. After I had worked for years in this field, the leaders of the gangs, organized crime and drug cartels, they figured out who was in the program and who was responsible helping these former criminals and for that, they made the decision to kill some of them. They killed at least two leaders and former members of gangs who we were working within the program. The last three months living in my country were dangerous. My family was persecuted by people wearing police uniforms who were not really police. It was so dangerous that we had to leave and we came here asking for asylum. Now we are waiting for the final decision of this process.”

“When I was six years old, life was good in Makobola, our village in southeast Congo. Everything seemed perfect; there were no worries. Every morning, Dad would say, “Time for tea,” before we would go to the garden to dig, plant our crops, and care for our rice, corn, and plantains. We enjoyed shooting birds with our slingshots and playing soccer with our friends and neighbors. In our village, we made soccer teams and played without a care in the world.  But then my dreams were shattered by a tribal war that came suddenly into our village. One day we woke up and my dad said, “You and [your brother and sister] must go and stay at the neighbors’ house while I go to other leaders and find out what is happening.” Our mother had gone to sell some tomatoes in the market. That was the last time we saw our parents. I was afraid, but I remembered my faith in God. I chose to trust the Lord.”

We look forward to seeing you soon to learn about Mennonite immigration to Pennsylvania and for informed and civil discourse about immigration from 1717 to 2017.