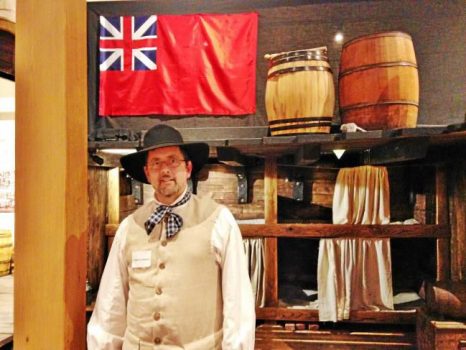 With these words from the invocation of Steve Kriss, Executive Minister of the Franconia Conference, 80 guests headed down that path.  One storyteller was Friedrick Alldörfer, whose passage was across the Atlantic in 1733.  Friedrick was portrayed by Heritage Center historian Joel Alderfer, an actual descendant.  He hosted guests in the cross-section of his ship, the focal point of our new exhibit.  The guests enjoyed a traditional 18th century dish—meat pies—followed by fastnachts.

Beny Krisbianto, from Indonesia, shared his journey to the United States, learning about the Mennonites, and allying with them in the building of an Indonesian church in Philadelphia.  He said that when new arrivals call his church for help, he doesn’t ask them if they have a green card.  Guests enjoyed egg rolls and some very colorful desserts.

Fernando Loyola and Letty Cortes shared tamales and tostadas and stories of many immigrants looking for help through their church in Philadelphia—Centro de Alabanza.  The church is part of the Franconia Conference.

Berthe Baruti shared her story of coming to the United States in stages from war-torn Congo.  She first had to come alone; her husband, and then a son, followed years later.  Hers was a thoroughly Mennonite story, her father being the first Mennonite pastor in her village.  The guests enjoyed boiled peanuts and beignets.  She pastors a French-speaking congregation with her husband in Elkins Park that consists of recently arrived Africans from many nations.

Each of the speakers are actively involved in welcoming and helping new arrivals.  They often get cold calls from them asking for help; they don’t just field “pastoral” calls–but calls asking for help in every area of transition to America.  Some of them also work other jobs to pay their bills.

Proceeds from the evening were $7637; they are shared between the Heritage Center and the three immigrant communities that provided our program and food–in support of their work with “New Americans.”

Moving this annual event to the museum in this progressive dinner format was an attempt to mirror the new exhibit, which features stories of recent local immigrants along with the 18th century Swiss-German story.  It is also part of the Center’s aim to use its resources to foster informed and civil discourse about immigration.  While technical issues around immigration were not a big part of the evening, everyone met new friends and began, perhaps, a new relationship on which to build that discourse.

Our thanks go out to our speaker friends and to Emily Ralph Servant and Steve Kriss of the Franconia Conference for connecting us to our speakers.

In a January 2, 2017 article for Mennonite World Review, Steve wrote:

“The truth is that for us in Franconia Conference to maintain stable numbers in our conference membership over the past decade, we’ve relied on this influx of immigrants. They are refugees, asylees, brain-drain and economic migrants. Some are formally educated; others struggle with English; some are documented; others are undocumented. Some parents come with a sacrificial hope that their children’s lives will somehow be better. Others come because they are running from violence or running toward what is perceived as prosperity and peace. All of these reasons exist within Mennonite communities here in the city and across the country.”

“If we want our church to continue to flourish, we’ll posture alongside immigrants in the struggle. The future of the church in the United States depends on our ability to continue to welcome Christians from other countries into this land with open arms, to put aside the politics of fear and to embrace newcomers with the love that casts all fears away.”

One attendee wrote, “It was exciting to be on the cutting edge of the changing face of our Franconia Conference.”

Thanks to Bob Keeler at Montgomery News for the press coverage you can see here: http://tinyurl.com/kdc6w93