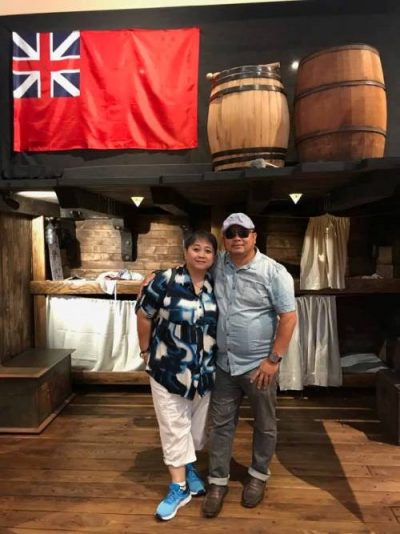 For three years, Beny Krisbianto faced the fierce opposition of close-knit, deeply entrenched neighbors, difficulties with four contractors, and the intransigence of City Hall.  One contractor told him to stop trying to build his church for recently arrived Indonesians in South Philly.  Now people ask him in amazement, “How is it that you have a relationship with the mayor?”  Mayor Kenney recently visited, and the city council held a meeting in the new church.  Neighbors who once opposed him invited him to serve on a community board.  Nations Worship Center, a majority-immigrant church, has a home—in South Philly and in the Franconia Mennonite Conference.

This 180-degree turnaround, said pastor Beny, is what God does with our hard times—use them to bring us back to faith–and for good.

On a gorgeous Sunday morning in Hatfield Township the service began with a very Anglo looking–in fact, some say, the spitting image of Daniel Craig’s James Bond–at the podium outside the Plains Mennonite Church.  However, this Bond was not speaking the King’s English—or even English at all.  Dock Mennonite Academy Superintendent Conrad Swartzentruber spent 8 years in Indonesia.  He opened the joint worship service with the South Philly congregation under the pavilion in the park the church built 10 years ago for community use.  He spoke Indonesian, to a joint gathering of Plains and about 60 members of Nation Worship Center.  About a dozen children from the south Philadelphia church frolicked in the park as their parents worshipped together with one of the oldest Mennonite congregations in America.

After a song, Plains Pastor Mike Derstine framed the day with the title of the Mennonite Heritage Center’s video—“The Earth is the Lord’s”.  Derstine had recently taken a baptismal class to the Heritage Center for an exploration of Mennonite history.  He alluded to the fact that the Indonesian church would see that video and experience that history in the afternoon.

The rest of the service was vibrant and joyful.  A highlight was a musical number by six Indonesian youth.  Swartzentruber translated Pastor Beny’s sermon.  Pastors Mike and Beny had the benediction, and the joint membership gathered for an all-group picture under the oaks.

An old-fashioned potluck followed, enhanced by a delicious Indonesian stew.  The group then boarded the Perkiomen bus for the Mennonite Heritage Center in Harleysville.

We didn’t know what it would be like for a new Asian American from South Philly to be dropped into the center of PA Dutch Mennonite culture.  Heritage Center staff and board members Gerald Benner and Andy Lapp greeted the guests, and we gathered in the meeting room.

Pastor Beny had asked us to start with the Heritage Center’s introductory video.  We decided to do this without translation.  With many of the guests having limited English skills, we didn’t know how they would respond.  The video opens with John Ruth’s sonorous voice over a scene of a precious old book being pulled from an archival shelf.  We were surprised to hear “oohs and aahs” in response.  There was rapt attention to the video that led our guests into the 21st century with stories of Mennonites in world service and even technological entrepreneurship.

Joel and Steve then guided them, with translation, through the exhibits on the migration of the 18th century and 300 years of Mennonite life in PA.  Our guests listened intently to the translation as we toured Work and Hope—our permanent exhibit–and Opportunity and Conscience—our immigration exhibit.  The two displays converge in an area dedicated to telling 21st century immigrant stories. We welcomed their help in expanding and preserving the stories of this current era.

Meanwhile Sarah Heffner led a fraktur activity for the children.  An older child diligently explored the exhibit on his own through an activity sheet.  Some of our guests chose to don the 18th century dress and pose in the cross section of the ship for more pictures.

One guest wrote us, “It was really a blessing for all of us to visit the historical museum.  Thanks.  God bless you more than you bless us.”

Our next majority-immigrant church visit is October 15, when Centro de Alabanza, also from South Philly and a Franconia Mennonite Conference Church, will visit.  This is a Spanish language church.