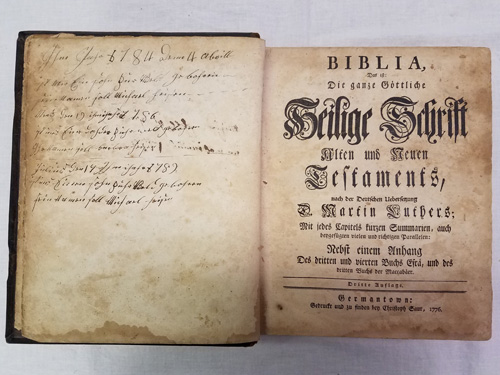 Many of you know the story of the “Saucon Incident” during the American War for Independence — eleven men of the Saucon Mennonite congregation in Northampton County were imprisoned for refusing to pledge allegiance to Pennsylvania, and all their moveable property was sold on auction. If you don’t know the story, read it here. (The linked book, Sweet Land of Liberty by Francis S. Fox, is available in the MHC Library, along with John Ruth’s account of the incident in his book ‘Twas Seeding Time, and court documents as published in the Pennsylvania Archives.)

Since 1990, the MHC has owned the Bachman family Bible, which must have been hidden during the confiscation, as it does not appear on the auction record.

The Bible of Jacob & Eve Yoder was sold at auction. It was purchased by sheriff John Siegfried, the man responsible for the confiscation and sale of goods. In Eve’s petition for relief to the Pennsylvania Assembly, she complained that “even their Beds, Beddings, Linens, Bibles & Books were taken from them and sold by the Sheriff to the amount of about forty thousand Pounds.”

What has come to us now, 250 years later, is the family register of Jacob & Eve Yoder, a loose page, frayed around the edges, presumably pulled from the family Bible before it was sent to auction. Gift of James L. Musselman.

Translated to English, it reads:

It appears the register passed to youngest daughter Eva Yoder Geissinger (1773-1858), wife of Abraham Geissinger. She had no children and the register went to the family of her sister, Fronica Yoder Shelly (1763-1807).

Fronica’s son Jacob married Barbara Shelly, who inherited her own parents’ family Bible, and the old Yoder register was placed inside this Bible. That is how the items were preserved, a Yoder family register loose in a Shelly family Bible.

The Shelly book and Yoder register were passed to Barbara’s daughter Elizabeth Shelly, who married Samuel Moyer. He was ordained a preacher in the Springfield Mennonite congregation in 1851.

From them the book went to their daughter Barbara, wife of Christian Musselman. Their son Samuel M. Musselman (1875-1938) became a Mennonite preacher in the midwest, and he took the Bible with him. From there it went to Denver, CO with his son George.

Thankfully Samuel Musselman’s daughter-in-law Della and grandson James decided that the book should come home to Pennsylvania. After contacting the Lancaster Mennonite Historical Society, they were put in touch with us. Through their thoughtful donation, this artifact that tells a story of nonviolent resistance during the American Revolution will be preserved in its community of origin.