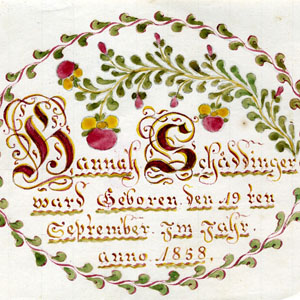 The tunebook also contains a second, loose bookplate in Gross’ hand for student Schaddinger, with her birth date.  The fifty-one numbered hymn-tunes and texts in the booklet, written in German script, appear to be in Gross’ hand as well.

The story of schoolmaster Jacob Gross

Jacob W. Gross (1807-1900), a son of Preacher Christian and Barbara Wismer Gross of Plumstead Township, grew up in the Deep Run Mennonite community and became one of the last of the old Pennsylvania German schoolmasters and fraktur artists in Bucks County.  He began his teaching career in about 1829 in the Mennonite community subscription schools of central Bucks County, before the advent of the state-sponsored public schools in the 1840s.  According to evidence on surviving bookplates now attributed to him, he taught in these community subscription schools until about 1835.

Bookplate in a tunebook made for Henry Godshalk, “Singing scholar in the New Britain School,” 1835. Private collection.

An aged master of the craft

In his 1897 essay on “illuminated manuscripts” of the Pennsylvania Germans, historian Henry C. Mercer of Doylestown lamented the passing of the fraktur tradition in Bucks County, and noted that “two aged masters of the craft still survive”, one of whom was Jacob Gross of New Britain.  In 1897, Mary Paschall, an associate of Mercer, photographed Gross, noting him as a schoolmaster and one of the “last surviving practitioners of Fraktur.”  In 1923, Mercer mentioned Gross again in an essay entitled “Zithers of the Pennsylvania Germans,” noting that he (Mercer) had been given one of these stringed instruments in 1897 “by Jacob Gross, formerly a Mennonite minister [actually he wasn’t ordained] and schoolmaster, then living on King’s road, New Britain township.”  Gross told Mercer that he had made and played the instrument in his earlier days, about 1865.  That zither remains in the Mercer Museum today. See Cory M. Amsler, editor, Bucks County Fraktur (Bucks County Historical Society & Pennsylvania German Society, 2001), pp. 310-317.

Jacob Gross had a cousin born the same year, Isaac Gross (1807-1893) of Bedminster Township, who was also a fraktur artist, and apparently a schoolmaster during the same years as Jacob.  In 1897, several beautiful pieces of Isaac’s fraktur were still in the possession of his son Henry K. Gross, when he was also visited by Henry C. Mercer.  Mercer eventually acquired and documented most of that fraktur for the Bucks County Historical Society/Mercer Museum collection, where it remains today (Bucks County Fraktur, 292-293).

Jacob married Mary N. Overholt in about 1830, and in 1832 purchased thirty-five acres of land in New Britain Township from his uncle Daniel Gross, built a house there and began farming.  This house, near the intersection of King and Chapman Roads, has a date board up in the gable, with a painted fraktur-style inscription, “Jacob & Maria Gross, 1832.” Although the inscription appears to have been repainted in recent decades, perhaps the original inscription was made by Gross himself.

Farmhouse built by Jacob and Maria Gross in 1832, and dateboard as it appears in 2018.  Photos by Joel Alderfer.

1832 deed from Daniel Gross to nephew Jacob Gross for 35 acres of land in New Britain Township.  Jacob and Maria Gross soon built  a house on the land and began farming there.

After he took up farming and likely gave up teaching, Gross continued to create lovely bookplates and family registers in Bibles for Mennonite families in the New Britain and Plumstead Township area, from the 1840s through the 1880s.  It appears that Gross also did some gravestone carving for Bedminster-Plumstead area Mennonites.  There are several gravestones in the Deep Run East Mennonite cemetery with beautiful fraktur inscriptions — one from 1832 and two from the 1860s.  One stone in particular, that of Jacob’s own father Christian Gross, dated 1865, is surely Jacob’s work.  There are at least a couple other examples throughout the Pennsylvania German community where the schoolmaster-fraktur artist is known to have carved gravestones.

Coincidentally, this gravestone for Christian Gross at Deep Run, dated 1832 with inscription similar to Jacob Gross’ style, has the very same shape as the 1832 date board on Gross’ house. Photo by Daryl Rice.

It seems Gross also conducted German-language religious schools for reading and writing, and singing, such as the one at the Valley Park School in 1872.  Well before this date, the Valley Park School had become a public one-room school and part of the Plumstead Township School system.  This school stood along what is now Valley Park Road, near Curly Hill Road, just east of Plumsteadville.  In some Mennonite communities in Bucks County, there was a practice of conducting German-language schools, for religious instruction and apparently on Saturday or Sunday afternoons, long after the acceptance of the state-sponsored public school system.  This was the case at the Deep Run School, next to the Mennonite meetinghouse, as late as the 1890s.

Several calligraphy family registers by Jacob Gross are found in Bibles in the MHC collection, and a couple of small bookplates with fraktur-style hymn-texts survive, signed and dated by Gross as late as 1893, when he was 86 years old.  A double bookplate in a small German New Testament in the MHC collection, is signed and dated by Gross in January 1892, noting “my age today is 85 years.”

Gross died on May 29, 1900, age 93, the victim of a fall that had caused internal injuries a few days earlier.  According to the newspaper obituary, “he was a man of remarkable vigor, and never suffered a severe illness until the accident that led to his death.”  He was buried in the Doylestown Mennonite cemetery.

Bookplate by Jacob Gross for his brother’s grandson in an 1884 German New Testament: “This New Testament belongs to me Daniel Gehman [Gahman]. It was given to me by my Grandfather John Gross, as a gift. In this book, we are told what we should do, and not do. Amen.” The reverse (shown below) reads: “This I have written today, January 29, 1892. Today is my birthday. I was born the 29th of January 1807. My age today is 85 years. Jacob Gross.” Private collection.