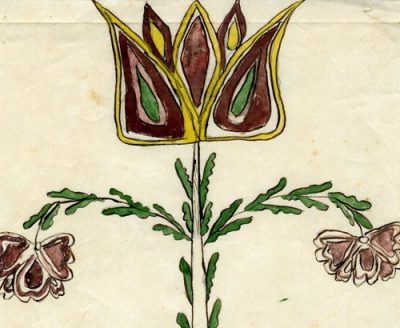 Earlier this year, Harold R. and Doneda Clemmer donated a small collection of folk art and a group of deeds and surveys from the family and homestead of his ancestors, Preacher Christian & Barbara Gehman Clemmer, of Hereford Township, Berks County. The Clemmers were members of the Hereford Mennonite congregation, in Bally, PA, where Christian was ordained a preacher in 1842.

We’ll feature some of the folk art and just a selection of the land-related documents from the recent donation in this post. The Mennonite Heritage Center had earlier acquired from a couple of other sources several other artifacts from this family and farm – I’ll highlight several of those here as well.

Barbara Gehman Clemmer (1815-1894) was born in Upper Hanover Township, Montgomery County, close to the Berks County line, the daughter of Preacher John Z. and Mary Latshaw Gehman, members of the Hereford congregation in Bally. Barbara grew up on the Gehman farm and had just two brothers: Abraham L. Gehman (1817-1913) and John L. Gehman (1819-1892), who bought the homestead (now a golf course). In 1838, she married Christian Clemmer (1813-1883), son of George and Anna Geissinger Clemmer of Hereford Township, Berks County. Christian and Barbara eventually bought a farm near his parent’s farm, along what is now Tollgate Road in Hereford Township.

A primitive fraktur school reward in the MHC collection, signed “Barbara Gehman 1826”, seems to have been made for Barbara Gehman (Clemmer). It was passed down in the family of her brother John L. Gehman.

Three other surviving objects made by young Barbara Gehman show her skill in traditional needlework and folk decoration. One of these is owned by a descendant.

Christian and Barbara Clemmer’s son, Henry G. Clemmer (1841-1928), grew up on the homestead, married Mary Geissinger, and inherited and purchased the farm from his parents. In the recent donation from the Clemmers are two primitive drawings by Henry.

Henry and Mary Geissinger Clemmer bought the farm from his parents in 1882 and lived there the remainder of their lives. After Christian Clemmer died in 1883, his widow Barbara Gehman Clemmer continued to live on the farm with her son’s family until she died in 1894.

Two other folk art drawings from the Clemmer family were also donated by Harold and Doneda Clemmer.

Alfred and Naomi Markley Clemmer operated (but apparently never owned) the Clemmer farm from the 1890s until his death in 1923, and raised their family of nine children there. It was bought by Alfred and Naomi’s sons Leroy M. and Warren M. Clemmer, from the estate of their grandfather Henry G. Clemmer, who died in 1928.

The donation from the Clemmers includes a fairly extensive collection of deeds, surveys, mortgages and other land-related documents from the Christian Clemmer homestead, dated from the 1740s to the 1920s. Here is an example of the land surveys.