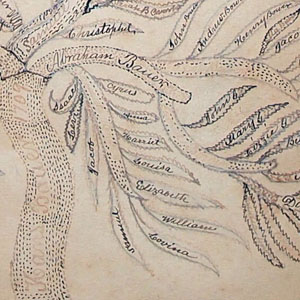 The tree, signed and dated 1897, traces many branches of the descendants of Mennonite immigrant Hans Bauer, a native of Switzerland who settled in Hereford Township, Berks County in 1734.

This chart was made in combination with a genealogy that Henry compiled, part of which was published in 1897 through the Harleysville News printing house. The complete manuscript of Henry’s genealogical work is in the possession of the family, but a transcription made by Raymond Hollenbach in 1969 is available in the MHC library. It is one of the best sources on Mennonite families of the Hereford community.

Henry Bower was a minister in the Salford Mennonite congregation. He was also a farmer and watchmaker who lived in this brick house on Sumneytown Pike, just below the intersection with Rt. 113, as the road rises a bit before entering the village of Harleysville.

Earlier in life, Henry may have been a schoolteacher. He created decorated manuscripts and drawings in a unique yellow and brown palette. Three of these are in the MHC collection today.

Large manuscript in the style of a Vorschrift (traditional German writing model), signed “Heinrich S. Bauer, May 24, 1853”. The text is from the biblical Apocrypha: “Wache Dich Auf Jerusalem und Trett auf die hoehe… [Arise, O Jerusalem, stand upon the height; look toward the east, and see your children gathered from west and east at the word of the Holy One, rejoicing that God has remembered them.]” (Baruch 5:5). The smaller text at the bottom is a hymn. Gift of Mary Jane Lederach Hershey & Hiram Hershey (1999.11.12).