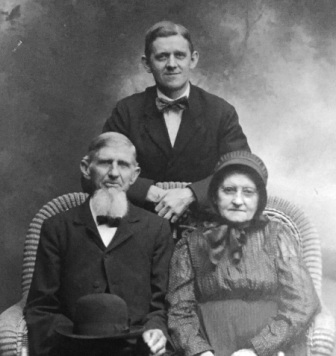 There are two Mennonite Bean families, one descended from John Bean (Johannes Biehn), immigrant of 1709 who settled in Worcester Township, Montgomery County; and the other from John Bean who immigrated thirty years later and settled in Rockhill Township, Bucks County.

The immigrant’s house in Worcester

John Bean of Worcester (died 1747) was a weaver whose home was at the corner of present-day Stump Hall and Hollow Roads. The house in which he lived still stands (pictured below) and is one of the oldest houses in Worcester Township. In 1980 it was added to the National Register of Historic Places. It is thought to have been built circa 1717 by Quaker brewer and mayor of Philadelphia, Anthony Morris, who owned the property from 1716 until he sold it to John Bean in 1728. For the next 150 years, it was home to the Bean family, several generations of whom continued the weaving business. They were members of the Skippack and Methacton Mennonite congregations.

Amos Bean (pictured above left, with wife Mary Ann Detwiler and son Amos Jr., circa 1910) was ordained elder (i.e., bishop) at Lower Skippack in 1875, two years after being called to preach. He was only 32 years old, and had five or six young children, soon to be followed by several others. Despite the busyness of parenting and farming, he provided what must have been stable leadership for the independent congregation of 300 members over a period of 45 years. The MHC holds copies of several of his sermons (Hist. Mss. 115). Photo courtesy of Roxanne Galgon.

Warren Bean (above right) served 12 years as a preacher at Upper Skippack before he was chosen as bishop in 1909. Warren was unusually educated for an “Old Mennonite” of his day. He had a teacher’s certificate from Ursinus College, though his career was as a poultry farmer. Warren kept exceptionally detailed records of ordinations and other events in church life; these records are now preserved in the MHC archives (Hist. Mss. 69).

Warren Bean’s record of ordinations by lot. For each date and place, the names are given of the men who were in the lot; then an asterisk is placed next to the name of the man ordained.

Warren Bean’s granddaughter Anna B. Guntz (1913-2005) was a skilled amateur photographer, taking most of her images on color slide film. She captured images of her family at Vincent and Salford that provide a rare colorful and artistic glimpse into local Mennonite farm life of the 1950s-1970s. Photos courtesy of Allen Guntz.

Lizzie with a granddaughter

A niece on the lane to the Guntz farmhouse

Bean’s of Bucks County and Ontario

The later immigrant John Bean (Johannes Biehn) (d. 1781) came to Pennsylvania in 1739. He was also a Mennonite and a weaver, likely a relative of John Bean who had come thirty years earlier. He purchased land in Rockhill Township, Bucks County in 1747. The Rockhill Mennonite Meetinghouse was built on adjoining land, and in an 1842 will, the meetinghouse was called “Beem Meedinghouse”. John Bean’s gravestone at Rockhill still exists. It reads “ANO 1781 DN [den] 29 IULI [July] IOHANNES BIEHN”. Photo courtesy of Karen Henderson.

The immigrant’s son, John Biehn Jr., became one of the first purchasers of land in Waterloo County, Ontario, Canada. In 1800 he bought 3,600 acres of land on the west side of the Grand River in what is today the city of Kitchener. John and wife Barbara Freed, with all seven of their children and spouses (and a few neighbors), undertook the hazardous journey of 500 miles across the Allegheny Mountains and Niagara River to British Canada. Reportedly the family took with them nine covered wagons, 22 horses and some cattle. John and Barbara’s granddaughter Mary Biehn (Saltzberger) (born 1800) is believed to have been the first child of European descent born in Waterloo County. The Biehn family has been active in the Mennonite community there. The Nith Valley Mennonite Church in New Hamburg was called Biehn Mennonite Church until 1975.

Many of John Bean’s descendants who remained in Bucks County became members of the Reformed and Lutheran Churches, and quite a number are buried at Nockamixon Union Cemetery in Ferndale. Some branches remained Mennonite, mostly at Rockhill, Blooming Glen, and around Quakertown. The wife of Mennonite progressive leader John H. Oberholtzer was Magdalena Bean (1804-1871), a great-granddaughter of the immigrant.

Sources on the Bean family: