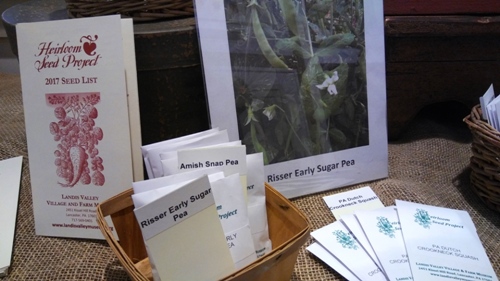 Spring (and gardening) is just around the corner! For those who enjoy gardening, perusing seed catalogs during the cold winter months brings the anticipation of another gardening season. Planning a garden and choosing which varieties to plant is always a hopeful exercise. I tend to overlook that I don’t always keep the weeds from predominating my garden by midsummer or that voles ruin my sweet potato harvest on a regular basis. One of these years, I will have a beautifully tended, productive garden with an abundance of attractive vegetables and flowers. And picking out the best varieties is the first step!  For those with interest in heirloom seed varieties, the Mennonite Heritage Center Museum Store has a selection of Pennsylvania German heirloom vegetable varieties. Stop by and pick up some packets of vegetable varieties that have been grown and preserved by Pennsylvania German gardeners for generations.

For the past several decades, gardeners have had a renewed interest in heirloom vegetable varieties. This interest occurred because heirloom varieties were being lost as fewer people gardened, and those that did bought seed instead of saving seeds from year. Also, plant breeders tended to focus more on varieties for the larger commercial market, which emphasized  uniform size and  harvest time, shipping capabilities rather than extended harvests, and (some would argue) unique flavor characteristics. Heirloom varieties are defined as varieties grown by a family and/or a community over a long period of time that have developed standard characteristics. They are “open pollinated” by birds, insects or wind and they retain their traits from one year to the next. Hybrids are created by plant breeders who intentionally cross two different varieties for specific characteristics, such as better disease resistance. Seed saved from a hybrid variety will produce a mix of plants that will not be “true to type”.

The Pennsylvania Germans were one of the people groups who saved seed and developed their own distinct heirloom vegetables over time. Varieties like “Speckled Lettuce” and “Hutterite Soup Bean” were saved from generation to generation and have interesting stories in their backgrounds. The Landis Valley Farm Museum, Lancaster, PA, started an Heirloom Seed Project thirty years ago to preserve unique Pa. German vegetables, herbs and flowers. The project is staffed primarily by volunteers who tend the gardens, preserve and package the seed.

This year, the Mennonite Heritage Center Museum Store is featuring a large selection of the Landis Valley Heirloom Seeds for your garden. You can choose from pole beans, bush bean, beets,  carrots, corn, cucumber, lettuce, peas, radish, turnip, squash and watermelon.  Some  favorites include:

Speckled Lettuce: Attractive  green leaf lettuce with red speckles. Speckled Lettuce went with Mennonites from Weaverland or Bowmansville to Ontario in the early 1800’s. It was donated by Urias Martin in Ontario to Seed Savers Exchange, a national seed saving nonprofit organization, and Landis Valley found it there.

Moon and Stars Watermelon: Considered an old Amish heirloom variety, the melon has large yellow moons and small yellow stars on its smooth, dark green rind. The foliage is also speckled yellow. Large seeds are tan, flecked with brown. The flesh of this watermelon is pink-red and is wonderfully sweet. Matures in 95-105 days.

Also of interest for Heirloom Gardeners

Landis Valley Museum invites gardeners to their May 12 and 13, 2017 Herb and Garden Faire. Vendors have heirlooms, natives and other hard to find varieties plus other products. Benefits the Heirloom Seed Project.