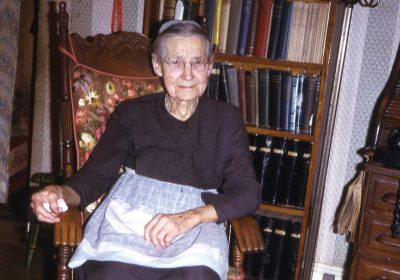 This article was written by Joel Alderfer for the MHEP Newsletter in 1994, based on research done for the exhibit When This You See, Remember Me: The Experience of Mennonite Women.

Hanna Rittenhouse (1880-1977) was born in Towamencin Township, Montgomery County, the youngest child of Jacob K. Rittenhouse (1838-1917), a township school director, and Elizabeth D. Clemmer Rittenhouse (1840-1922). She enjoyed her grade-school education and graduated from the eighth grade in 1895, for which she wrote the class history. About a year later she wrote and edited the Towamencin Alumni Gazette, in which she updated class members on the activities of their fellow graduates. Hanna was interested in pursuing her education further and becoming a schoolteacher, but her mother would not allow it, as she was needed at home on the farm.

Hanna was introduced to her future husband, Hatfield schoolteacher Jacob C. Clemens, on the evening of her graduation program in June, 1895. He was impressed with her reading of the Class History, and their friendship developed over the next year. So, as Hanna later wrote, since she was not allowed to become a teacher, she married one instead, in 1899. Jacob was a fancy dressing, handsome young schoolmaster who loved music and played a violin.

After marriage, they lived in Lansdale, where Jacob soon began a promising career in the National Bank. Here, their first child Ernest was born in 1900, and they soon joined the Plains Mennonite Congregation near Lansdale. As young Mennonites, they enjoyed a fancier lifestyle than most, including musical instruments, attending music concerts at Willow Grove Park, baseball games, the use of a Christmas tree, and finer clothing. With the new bank job, they were looking forward to a prosperous and more refined lifestyle.

Their life changed drastically in 1906 when “J.C.” was ordained a preacher, without any preparation or warning, by the casting of lots in the Plains Congregation. They and the congregation were shocked and knew this meant a much humbler lifestyle would be required of them. Among other things, this meant J.C. had to give up his bank position. They later moved to a small farm near Lansdale, where life became much simpler and more difficult financially. Hanna later wrote:

I did not want to be a minister’s wife… I shrank from publicity… There was no other way out, no alternative, you either filled the office or forfeited your membership … I tried hard to adjust myself, it seemed that our whole manner of life had to be completely changed.

In her role as a minister’s wife, Hanna had many new responsibilities thrust upon her. But she was determined to be a supportive partner in ministry. She helped J.C. prepare sermons by memorizing and looking up scripture references and by hosting many visitors. She was also forced to manage their produce farm while he was away on many extended preaching trips. Hanna later wrote:

In 1914 he started Evangelistic meetings [away from home]…during this time my responsibilities were very heavy, the boys could do the [farm] work; it was my job to keep them at it and see that it was done right. But harder on me than the physical work was that many of our members did not favor Evangelistic meetings and I chafed under the criticism…if he preached not farther away than Lancaster, he had someone bring him home for the morning service [at Plains] and take him back…for the evening service; this meant that a dinner had to be prepared for a carload of visitors and sometimes two. The longest he stayed away from home at one time was four weeks, but that was too long…

While J.C. was away on church work, he and Hanna would write letters to each other. Many of these have survived and tell of her heavy workload at home. One such letter, dated August 20, 1937, written to J.C. while he was at Mennonite General Conference in Turner, Oregon, tells the story.

We are having very hot weather…there is no relief in sight. I mind the heat more than ever before and I’ve had much hot work canning tomatoes and drying corn. The corn is giving us trouble to sell, James had three hundred ears this morning and brought half of it back. The stores wouldn’t take any.  I am drying it as fast as I can but it goes rather slow and if we can’t sell any I fear a lot will get too hard. James and I are both as busy as can be, he was weeding the corn patch but is not finished yet…  I must stop writing and try to cool off and get some sleep… Glad you are enjoying yourself. May God watch between us. With love from all, Mother.

My life as a minister’s wife was by no means all hardships, we had pleasant experiences, sometimes I went along on trips but always felt I could pray better at home and trusted the Lord would be pleased….

One of those ministerial trips in which Hanna was able to accompany J. C. was to the Mennonite communities in southern Ontario in August, 1927. She kept a record of this trip in a small booklet, noting her appreciation for the families that hosted them, for the beautiful scenery, for the new experiences and for traveling safety.

Hanna gracefully accepted her role as a busy preacher’s wife and became an excellent manager and economizer. Her meticulous records of their farm pro­duce sales and of her sewing work show her attention to detail and her ability to produce much-needed extra income.

She never forgot her dream of a better education, at least not for her children, and saw to it that some of the children went at least to high school. For this, she and J.C. were criticized by fellow church members. She helped her children to study and thereby furthered her own education.

A gift to the historical community

As she reached her later years, she began to write some of her memoirs (which are now preserved in the MHEP Archives) and presented them in congregational settings. Hanna and J.C. lived to see their 65th wedding anniversary and almost sixty years of shared ministry in the Franconia Mennonite Conference. As far as the family knows, Hanna did not keep diaries during their active years of ministry. But during the last several years of her life she did keep a brief record of daily events, until the last day she lived.

After Jacob’s death in 1965, Hanna became a living history resource for many high school and college students writing church history papers and for local folklife scholars.

Her longevity, involvement in years of ministry, good memory, and enjoyment of talking made her a prime informant. She thoroughly enjoyed being interviewed, especially by children. [Audio interviews of Hanna by historians John Ruth and Isaac Clarence Kulp are archived at the MHC.] Hanna died in 1977 at the age of ninety-seven in the farmhouse where she lived most of her married life.

More of Hanna’s story and personal writings can be found in the Jacob & Hanna Clemens Papers (Hist. Mss. 3) at the Mennonite Heritage Center.

Autobiographical notes by Hanna’s husband J. C. were published earlier on this blog.