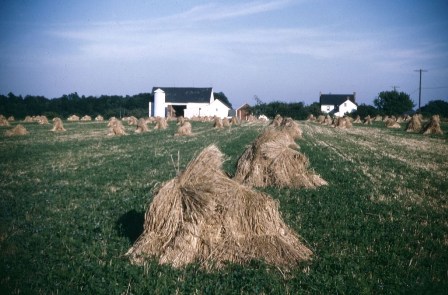 Harvest time was highly significant for southeastern Pennsylvanians in the 19th and early 20th centuries, and Harvest Home services were a regular part of the church calendar. The services were an expression of gratitude to God after the months of hard work planting and cultivating the region’s fertile soils had given way to harvest time. Pennsylvania Germans of the 19th century typically observed the ingathering of crops with harvest services more than they celebrated the Thanksgiving holiday. (Our current Thanksgiving holiday stems from the harvest celebration held at the Plymouth colony in New England in 1621. President Lincoln only officially established the national holiday of Thanksgiving in 1863.)

Written accounts from Lutheran and Reformed congregations describe harvest services as early as the 1830s. Scheduled anytime between July to October, these Harvest Home services were a time to give thanks and eventually also became an opportunity to collect for missions and other church needs. Photographs of Lutheran and Reformed congregations from the early twentieth century show lavish displays of elaborate abundance. Beautiful decorations of potted ferns and palms, floral arrangements, sheaves of grain, cornstalks, pyramids of choice fruit and vegetables, and home canned goods graced the front of the sanctuary. The produce in the display was given to either the pastor and his family or retirement communities or orphanages. As late as 1884, Pennsylvania German Lutherans still favored Harvest Home over Thanksgiving with an editorial in the September 5, 1884 Lutheran Observer proposing that October 12 would fit the bill for the national holiday observance of thanks for the harvest.

These meetings (Harvest Home) are held in the fall of each year to commemorate the ingathering of the harvest and “to remember the Lord of harvest” in thanksgiving. Texts are usually selected from the Old Testament and considerable attention is devoted to the promises of material prosperity given to the Israelites in Canaan if they would truly serve the Lord. Warnings are sounded against apostasy and the example of the apostate Hebrews is pointed out. The meetings are usually held on Saturday afternoon, and ordained men from many congregations are present at all the Harvest-Home meetings. In general the members are very conscientious about attending at least one such service each year.

In 1884, Preacher Jacob Mensch of the Upper Skippack Mennonite Congregation, recorded in his diary attending at least seven “Harvest Meetings” in Franconia Conference congregations, between July 29 and August 23. These were at Skippack, Providence, Worcester, Towamencin, Perkasie (Blooming Glen), Line Lexington and Boyertown. This was similar to numerous other seasons of harvest meetings recorded in his diary. It seems that in the Franconia Conference, at least in the late 19th century, August was the traditional month for harvest meetings.

Nineteenth century Eastern District Mennonite churches tended to borrow more freely from Lutheran and Reform traditions in their worship style and did so with their harvest services. Congregational members brought their prize produce and built beautiful harvest displays in the front of their sanctuaries. Second Mennonite in Philadelphia created harvest displays at the turn of the century as recorded in the accompanying photograph. Gradually commercially processed cans of vegetables and soup along with bags of sugar became part of the harvest decorations as shown in the 1959 photograph of the Harvest Home display at Deep Run Mennonite church. The tradition of the harvest home displays continued well into the twentieth century.

Home News – The Board of Managers and the Home staff are very grateful to the Longacre Fruit Farm of Bechtelsville for 108 baskets of dropped peaches which were serviced at the Home. Liberal quantities of fruit from other sources were also highly appreciated, which included 22 bushels of pears from one orchard. Some of the fruit arrived just before Anniversary Day, but with the help of guests and volunteers workers from various churches it was all taken care of without waste. Churches which donated their Harvest Home displays to the Home were the following: West Swamp, Upper Milford, Saucon, Hereford, Flatland, Bethany, Perkasie, Zion of Souderton, Second of Philadelphia, Deep Run, Springfield and Lansdale. …..On the evening of October 25, a group of young people from the Upper Milford Church of Zionsville came to the Home and by the light of the “Harvest” moon husked a field of corn, hauled into the crib, tied up the fodder, and enjoyed a pleasant evening while giving service in the old fashioned way.

Today many congregations observe Harvest Home in a church service on the Wednesday evening before the national Thanksgiving holiday in November. They can no longer collect home canned goods for charitable programs because of government health regulations; but sacks of flour, boxes of spaghetti, and cans of fruit that are brought to Thanksgiving Eve service (and Sundays throughout the year) contribute to the needs of nonprofit organizations. There are numerous food banks operating in the local area — including Manna on Main Street, Keystone Opportunity Center, and Pennridge FISH — that distribute collected food to people in need.

The God of Harvest Praise

One of the hymns often sung at Harvest Home services; written by James Montgomery in 1840. Come to our Harvest Home program on Oct. 27 and sing hymns like this!

The God of harvest praise,
In loud thanksgivings, raise
Hand, heart, and voice;
The valleys laugh and sing,
Forests and mountains ring,
The plains their tribute bring,
The streams rejoice.

Yea, bless His holy name,
And purest thanks proclaim
Through all the earth:
To glory in your lot
Is comely; but be not
His benefits forgot
Amidst your mirth.

The God of harvest praise;
Hands, hearts, and voices raise
With one accord;
From field to garner throng,
Bearing your sheaves along;
And in your harvest song,
Bless ye the Lord. Amen.