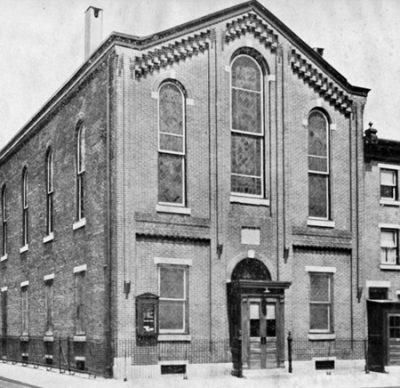 Former MHC intern Dan Sigmans, who grew up in Bucks County, now lives and works in Philadelphia. Recently he helped with a successful application to add the old First Mennonite Church building at 513 Diamond Street (built in 1881) to the city’s Register of Historic Places. I asked him a few questions about the process and the historic site. You can view the full application here. It was approved March 10th.

2020 update: Unfortunately, the building has not survived, despite being placed on the historic register. The building’s owners were not able to make the repairs necessary for stability and safety. See this report from Hidden City Philadelphia: https://hiddencityphila.org/2020/01/lost-buildings-of-2019/

How did you get involved with the application process?

On one of the online forums that I peruse, a local Philadelphia historian and preservation activist posted a picture of a previously Mennonite church in North Philadelphia, which now houses another unaffiliated congregation. He referred to this church as Diamond Street Mennonite. While the building is literally on the corner of Reese and Diamond Streets, I remembered that there were once two Mennonite congregations which inhabited Diamond Street, and that the one he posted a picture of was actually known as First Mennonite Church of Philadelphia, and was far older than the real Diamond Street Mennonite Church. I corrected him in the name and, seeing that I was interested and had some base level of knowledge about Mennonites in the area, he asked me to help write a nomination for the building to be listed the Philadelphia Register of Historic Places.

The building in 2011. Photo courtesy of Janette L. Amstutz.

What is the effect of listing this building on the register?

Getting a building listed on the Register of Historic Places means that the Philadelphia Historical Commission “must review all proposals that require a building permit that would alter the appearance of the historic resource prior to the commencement of work” (as stated by the Historical Commission’s website). It effectively preserves the exterior of the building in the event that the property owner wants to redevelop or demolish the existing building. As various neighborhoods around Center City Philadelphia as well as the University campuses are experiencing increased residential development investment, old churches in changing neighborhoods are often some of the easiest targets for demolition and redevelopment.

The old church exists at the confluence of two tides of development, one from Temple University, and the other from the Kensington section of the city.  At this point, the old First Mennonite building continues to be used as a church, though we have no idea for how much longer. The exterior of the building continues to be in fairly rough condition, but the good news is that the designation makes the building eligible for preservation grants which, while limited in how much they could provide, can be used for the maintenance of the church.

Did any aspects of the application process (or First Mennonite Church itself) surprise you?

By the late 1800s, First Mennonite grew to be the largest congregation in the Eastern District Conference, drawing both historic Mennonite populations as well as new converts. At this time, it had a membership well over 400 individuals. This is quite contrary to the “Quiet in the Land” narrative that I was used to hearing, especially of churches in the Mennonite Church (MC) denomination, which I am most familiar with. In terms of firsts, it was likely the first Mennonite church started in an urban area in the United States. It was also the first Mennonite church to ordain a woman, when the congregation ordained Ann Allebach in 1911.

It was also surprising to me to see how much this church’s success was the result of the personality and leadership of Nathaniel B. Grubb, a transplant from the Schwenksville, PA area. As a result of his 38-year charge at First Mennonite, Grubb became one of the preeminent leaders of the Eastern District Conference and the Philadelphia Protestant community.

N. B. Grubb in the First Mennonite pulpit, circa 1902. Mennonite Heritage Center Collection.

Prior to this research, I would have never expected that such a center of power for local Mennonites would have existed in North Philadelphia. Writing this nomination transported my mind to a Philadelphia which is almost unrecognizable from our current-day perspective and assumptions of the city.

The Mennonite Heritage Center played an essential part in gathering almost all of the initial source material and most of the pictures that were used for the nomination. I spent a day at the Center perusing archival materials and scanning everything that I thought would be useful for the nomination. Without MHC’s direct and responsive help regarding this, writing the nomination would have been nearly impossible.