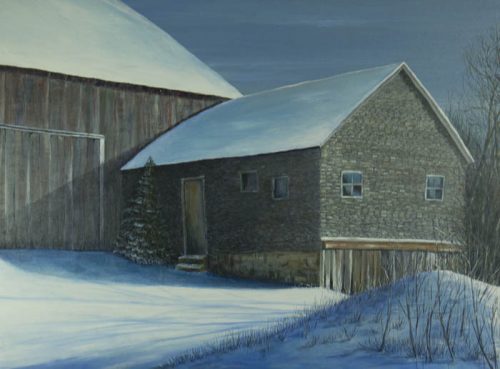 As I approach seventy, I find more and more in common with the old barns that still dominate the Pennsylvania landscape.  Some are functioning as they did a century ago, with layers of new paint and signs of repair.  The hay is stacked high in the loft and silo brimming with corn. Other barns have lost their identity and have undergone conversions. Some are now houses or restaurants or any number of different things other than that for which they were built.  Then there are the sad barns that lost their shingles one at time over the years, like the family members who once respected and protected them. The barn door hangs askew, shutters are gone and the entire structure leans with the prevailing winds.   Trees grow in the cow path and a vinyl-clad housing development grows in the field. Then there are the moss-covered stone foundations that whisper, “I was here.”  Like an abandoned cemetery, they crack and crumble with the persistent freeze and thaw of the seasons, until they are swallowed up by decaying leaves and disappear.

I suppose some would say that I am in need of a little repair myself these days.  A couple of my teeth have been capped and I have more than a few scars, proving my determination and resilience.  The hair is long gone, but not my dreams.  I still do what I have always done, but I often do them differently.  I might do them slower or perhaps by finding a way to avoid overtaxing my left shoulder,  that lets me know when it’s time to put the shovel down.  Like some of those barns, I’ve been through conversions over the years, forced by circumstances to adapt to change.  I’ve even learned to accept some realities over which I have no control.  When possible and with time, I have found a way to embrace most of these challenges and upon reflection see them now as gifts.

In my mid-forties, I survived a major stroke which left me confused and speechless.  My right side was paralyzed and without the sense of touch.  Some thought I would never leave the hospital, but I did. I came home broken and scattered, like a barn following a tornado.  My family, my friends and my belief were all still in place like a stone foundation, but everything else was in ruin.  One timber at a time, my frame was reconstructed. I was re-roofed, sided and painted with love.

Eventually, I was able to go back to work as an Art Teacher in the North Penn School District.  In time I moved to a position at central office, becoming the Manager of Professional Development.  Before retiring I had the honor of serving the community as the Director of Elementary and Director of Secondary Education.  The stroke gave me the opportunity to learn how to learn so that I could teach others.

As a right-handed artist, I avoided picking up a paintbrush for a long time.  I can’t feel the brush in my fingers, much less the tension of the bristles against the canvas.  Painting seemed as impossible as hiking through the Alps, but I closed my fingers around a brush and dipped its tip into a dab of barn-red paint.   I have dropped my brushes a hundred-thousand times, but I paint!

I lean against the sunset-side of a weathered barn, watching the seasons sweep over the rolling hills of Pennsylvania.   I think about all that keeps us standing and know for sure that it is the love.