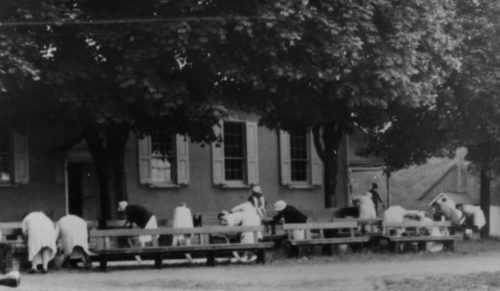 The following interesting account was published in the newspaper Bucks County Intelligencer (Doylestown), May 9, 1877, with the title “Annual Meeting of the Old Mennonites”.

Preparations were making on Saturday last for the annual meeting of one of the branches of the German Mennonites at the Deep Run meetinghouse, in Bedminster Township. An attache of the Intelligencer office who happed to pass that way was invited to be present on the morrow and witness the ceremonies. Sunday morning people began to come very early, and some of them from considerable distances. By eight o’clock the meeting was fairly under way. The house, a large structure, with room for about six hundred people, was full in every part. The brethren and sisters did not sit together.

The  females, all dressed simply but neatly, each with a white cap covering head and ears, were seated  on  uncushioned benches in the centre of the room. The men occupied seats at the sides of the building. Isaac Overholt, of Hilltown, was the officiating minister [bishop], and was assisted by two others. These people believe in the practice of honesty as well as the theory, as was made manifest by the large number of outer garmets hanging around on hooks and nails outside of the building, in perfect safety, with no one to watch them. The services were conducted entirely in German, and consisted of the sermon and prayers, followed by the sacrament, and interspersed with congregational singing.

The sacrament was partaken by about five hundred people, and its administering occupied considerably over an hour. The minister, followed by a member bearing bread, passed around through the congregation and distributed a small piece of bread to each communicant. This was preceded by a few remarks warning members who had any feeling of ill­will or enmity against a neighbor not to take part.

All the while the bread is being distributed the minister repeats passages from the Bible in a loud voice, or admonishes his hearers to keep the paths of righteousness.

All the while the bread is being distributed the minister repeats passages from the Bible in a loud voice, or admonishes his hearers to keep the paths of righteousness. After the bread comes wine, which the minister also hands out. One cup, that is replenished as it becomes empty, is used by all. Each communicant takes the cup from the minister’s hand, the brethren all being served before the sisters.

During this part of the ceremony a number of hymns are sung, all in German and all to the same tune [MHC editor’s note: Hymns were sung to various tunes, but because they were sung slowly, with multiple verses in German and a humble droning tone, they probably sounded uniform to the newspaper reporter. For an example, listen to this Old Order Mennonite rendition of “Aus der Tiefe Rufe Ich (Out of the Depths I Call)”. The tune is sung (faster) by Mennonites today, with the text “Praise to God, Immortal Praise”.]

The meeting is then concluded by a prayer and hymn, when members and visitors disperse to their respective homes. The session lasted about four hours and the closest attention was paid to the remarks during that time. The large number of very young children present was noticeable; it being considered better that the mothers should bring them than stay away themselves.

The Mennonites in the upper part of Bucks County are very similar to the Society of Friends in many of their principles. They are not allowed to go to law with one another, not to go to war, and they are prompt in the payment of their debts. The meeting house near Deep Run was first built in 1766, since which time it has been enlarged and rebuilt. Some years ago the society divided, a portion going off and building a new house of worship, not very far distant from the old one. The seceders are called the New Mennonites, and are generally supposed to be rather [less] strict in their views than the older branch.

Today (2020), the Deep Run Mennonite congregations (distinguished by locations East and West) are united in one conference and have a close working relationship.