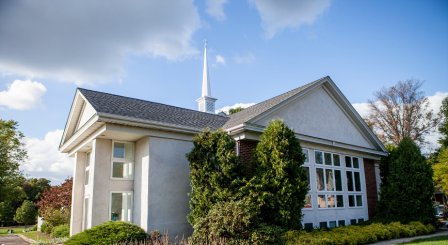 The Brethren in Christ are a historic Anabaptist group who often live in the same communities as Mennonites, including here in the Perkiomen Valley. Mennonites (and other local people) should know their story. Thanks to Reid for writing this overview.

The Brethren in Christ Church is a small Christian denomination found in the United States, Canada, and many other countries around the world. While historically, they have a strong kinship with the Mennonite congregations of North America, their unique place at the crossroads of major strains of Christianity has contributed to an interesting dynamic within the identity of the Church, and has left the Brethren in Christ distinct from other denominations.

Historically, the roots of the Brethren in Christ Church are in Lancaster County, Pennsylvania, along the banks of the Susquehanna River. The church began in the late 1700’s among a group of Swiss and German immigrants who began to adopt certain beliefs that did not fit with the other churches of Lancaster County. Chief among these was their commitment to “trine immersion” believer’s baptism, the practice of submerging a new believer underwater once for each aspect of the Holy Trinity. This led a small group of Christians to break off into their own group, taking the name “River Brethren” to reflect their home (along the Susquehanna River), their fellowship, and the place they chose to baptize members.

These River Brethren, and later the Brethren in Christ, had much in common with the other major churches of Lancaster County. However, as previously mentioned, the crucial distinction was their chosen style of baptism. Like the Mennonites, the River Brethren believed in baptism as a symbolic commitment to a Christian life, and emphasized obedience. However, the Mennonites practiced baptism by pouring, rather than trine immersion. And while the Dunkers practiced trine immersion, both they and the early Mennonites rejected the River Brethren view that baptism was a testimonial symbol of a previous personal conversion experience (Wittlinger, 23). These differences became a breaking off point, and led to the creation of the River Brethren congregations.

Interestingly, the early River Brethren made a point to obscure the identities and roles of those involved in the founding of the church. Tradition has it that they took steps to avoid any individual or group being seen as leaders or founders, and there are reports of a pledge to keep secret the identity of the man who performed the first baptisms.

In spite of this, one of the most prominent figures among the River Brethren was Jacob Engle (1753-1832). Engle is involved in or central to most of the traditions surrounding the founding of the River Brethren. Often, he is said to have been the leader of the group of dissatisfied Christians who could not find a minister that would baptize them in accordance with their beliefs. It is also possible that he performed the first River Brethren baptisms. What is known for certain is that he was born in Switzerland in 1753, immigrating to America with his family only a year later. Sometime after his baptism in 1778 at the age of 25, he emerged as one of the River Brethren’s early ministers and leaders and is, to this day, considered one of the central founders of the Church.

Tombstone of Jacob Engle, translated from German: “Here rests an old patriarch whose labor in the work of God was with diligence. Now he is in his father’s land. Jacob Engel was his name. His name now is much better. He lived and died a true Christian. He brought his age to 3 months. 79 years. 5 days. He now lives in eternal rest. Source of images: Findagrave.com

Throughout the 1800s, the Brethren spread from their birthplace in northwest Lancaster County throughout the rest of North America. By 1880, they had gained a presence in at least ten American states, and had a significant following in the Canadian province of Ontario. The American congregations were focused in Ohio and Pennsylvania, but they were present throughout the Midwest and Great Lakes states, and as far west as Iowa and Kansas. It was in the 1860s, at the time of the Civil War, that the River Brethren officially adopted the name “Brethren in Christ Church” (BIC) in order to register as a religious organization with the United States government.

The Woodbury Brethren in Christ Church, built in 1867, was the cause of an early schism in the church. Many Brethren believed the use of meetinghouses to be too “worldly”, and insisted on meeting in the homes of other members. When eventually the church began to construct meetinghouses, this led to a divide with the “Brinserites,” the Brethren who had constructed this meetinghouse. Image source: BIC Archives

The most significant change in Brethren in Christ history came in the 20th century, however. Following two brutal world wars, church traditions and identity were drifting. While many young BIC men had chosen nonresistance and alternative service in the face of the drafts, many others had chosen noncombatant and even active military service, being unclear on the pacifist tradition of the church. In addition, church membership had begun to plateau, as younger members of BIC families lost interest, and only a few new families entered the fold.

Some in the church saw the growing Evangelical movement as the path forward, while others remained thoroughly devoted to a more strictly Anabaptist path. The church as a whole began examining potential relationships with the National Holiness Association (NHA) and the National Association of Evangelicals (NAE). Many viewed new ecumenical relationships as a way to expand the influence and membership of the BIC church.

It was at the 1950 NAE convention in Indianapolis, Indiana, that a group of visiting BIC leaders held an impromptu meeting and prayer session in one of their hotel rooms. The leaders in attendance shared personal thoughts and feelings on the state and progress of the BIC church in a way that had not been done before, and this new discussion gave rise to a significant movement that led to a decade of change in the church.

Some significant changes that came out of this time were an increase in pay for pastors to a full-time wage, the rolling back of church dress rules, and an increased focus on a more spiritual, less legalistic form of Christianity. In the words of Carlton O. Wittlinger, BIC scholar, “their emphasis on piety increased, while their emphasis on obedience decreased” (Wittlinger, 498). While many viewed this as a good thing, rejuvenating the church, others questioned the wisdom of the decisions. Remarkably, however, there were no significant schisms or divisions, and all factions remained committed to the church.

This trend has had a continuing influence on the Brethren in Christ Church to this day, leaving it somewhere in the middle of Christianity. While the church is not as purely Anabaptist as many Mennonite congregations, it has never embraced the full conservative Evangelicalism of many mainstream denominations. It is certain that the BIC church has not seen its last period of transformation, and it will surely reckon with the pull between Anabaptist, Pietist, and Wesleyan roots once again in the future.

The Brethren in Christ presence in Bucks and Montgomery County is for the most part restricted to the Souderton and Silverdale congregations (though for many years there was a congregation in Graterford, which has now closed).

Silverdale Brethren in Christ was the earlier of the two churches, founded by families from Lancaster County in about 1825. The original church building was built in 1883 and added onto in 1944. The current building was built in 1958. The church is in the village of Silverdale, about five miles north of Souderton along Route 113.

However, a lack of transportation to this area led some members who lived further south to begin meeting in the homes of brethren in Souderton, and eventually build their own church on the corner of Railroad Avenue and Church Street in Souderton. Later they built a second church on Cherry Road in Hilltown Twp. and moved there in 1962. Their presence in the area, although larger in the past, is fairly small today, with around 300 members between the two churches.

The Brethren in Christ Church goes much further than these local stories however. It would take much more than one blog post to cover even the history of the BIC in Pennsylvania, let alone the rest of the country, and the rest of the world. While the Brethren in Christ Church is, and in all likelihood will remain, a small denomination, that has never kept them from continuing their devotion to their beliefs and their commitment to a Christian way of life.

Sources on the Brethren in Christ

Wittlinger, Carlton O. Quest for Piety and Obedience: The Story of the Brethren in Christ. Nappanee, IN: Evangel Press, 1978.