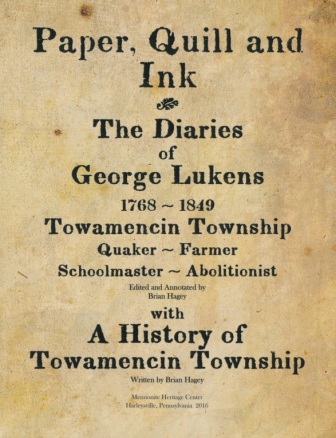 George Lukens’ diary is a personal account of the early years in Towamencin Township, Montgomery County, Pennsylvania. Towamencin’s rural past, long hidden within the centuries old pages of Lukens’ diary, is revealed through his writing, with thorough explanatory notes by editor Brian Hagey.

Local and regional characters brought to light are introduced, allowing us to share in the good news of harvest and market days, as well as the sorrowful times upon the passing of loved ones. Lukens also recorded the passing of many fellow Quakers, and Towamencin neighbors, enabling genealogists to update their records where before there was simply a line drawn on a page denoting an unknown date and place of death..

In the Lukens diaries, you will see man and beast hard at work in the fields, follow the Lukens’ to meetings and market, and hear the snort of a horse hauling a heavy load of grist home from the mill.  You will see how much things have changed in Towamencin Township over the past three hundred years, and how many things have remained the same.

Treatment for a bee sting – 1808
Third day 26th [Tuesday July 26] This morning a bumble bee stung me on the crown of my head which soon swell’d me all over & I got very fainty. I got Matthias to go to Henry Smith, he came & when he went to bled me said he could find no pulse but struck one & got no blood then struck & I bled about half pint then it stopped & I grew blind & that continued with dreadful sickness for a good while till they gave me some milk with rue 1 boil’d in it  Father went to meeting I desired him to send the Doctor but he did not come soon tho’ Susanna Springer came & desired me to take Camphire 2 which I did & the faintiness seemed to abate & perspirations came on.  Susanna wanted a Cow & I sold her the Muley heifer & Calf to 15 ½ Dols they half Dol she pd & the boys took the Cattle & took her home for her.  Sampeys Girls were pulling flax in the afternoon Mary & Hannah Tennis came Mary got 2 lbs wool & pd 7/6 for it.  Doctor came & left me some physic but I took none of it he got 4½ lbs cheese
1 Rue is an herb that acts as a narcotic.   2 Camphor is from the Camphor tree. It reduces pain and itching.

The Lukens family barn built in 1814 (no longer standing), now the site of Rosenberger Academic Center on the campus of Dock Mennonite Academy.

Raising a new barn on the Lukens farm – 1814
Fifth day 16th [Thursday, June 16] they came so as to be above thirty persons of us, tho’ we did not finish tho’ no accident but some blame the want of Whiskey  tho’ I bless and praise my GOD
The barn raising was not completed today, because some of the volunteers wanted an afternoon whiskey break.  In early America…farm laborers were often enticed not only with a good day’s wages but also with regular servings of strong drink for their noonday meal and afternoon work breaks.  However, on the Lukens farm, alcoholic beverages were unwelcome; hence, the workers left the unfinished task to find alcoholic beverages elsewhere.

Quakers preach at the Brethren Meetinghouse in Towamencin – 1830
First day 12th [Sunday, September 12] We were at Gwynedd meeting Samuel Livezy there he & Joseph Foulke 1 came with us home, had dinner thence to John Reiff’s meeting house 2 had a favourable time they both spoke & Wm Prise [Price] in dutch 3 after which we were at John Reiff’s had victuals thence they homewards & we home…
1 Joseph Foulke was a Quaker publisher, schoolmaster and preacher.  2 The Brethren Meetinghouse was along the Old Forty Foot Road near present-day Bridge Road in Towamencin.  3 To say someone spoke in Dutch was a common way to describe someone speaking in a Germanic language.

“With his careful transcripts, enhanced by illustrations, definitions, and helpful commentary, native son Brian Hagey has revealed the contents of George Lukens’ diaries, which were laid aside and undiscovered for many decades. The diaries open a window into the life of the Lukens family and their local community. As an extra bonus, Hagey has provided an illustrated review of early Towamencin Township, giving good historical and geographical context for the diary accounts that follow.”
–S. Duane Kauffman

“In finding, transcribing, annotating, introducing and illustrating the forgotten daily chronicle of George Lukens, pre-Civil War Quaker farmer in Towamencin Township, Montgomery County,  Brian Hagey has presented  a genuine gift to the history-appreciating community of southeastern Pennsylvania.  Paper, Quill and Ink, a labor of love worked on over most of a decade, deserves high praise for its bounty of detailed research, faithful transcription, surprisingly excellent visual illustrations, and explanatory helps  – all opening new access to an otherwise sparsely documented scene.  The laconic farmer’s record takes  a reader meticulously into the texture of our region’s agricultural, economic, social and religious life.  Set in context by Hagey’s  interpretive essays, the diary takes its place as a permanent  enrichment of the region’s communal memory.”
–John L. Ruth

NOTE: After payment is made, you will immediately receive an email from info@mhep.org with a link to download the book. This link will be active for 24 hours. If you don’t receive the email, please check your junk email folder.