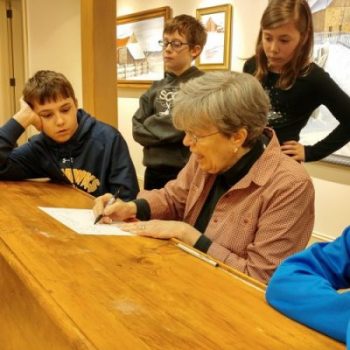 We were glad to have the Souderton Charter School 7th graders visit us again today.  Such a polite and inquisitive group!  Here’s what our school field trips look like in the winter months:

After an introduction to the Center and finding out what students already know (this group had been well-prepared with recent study of Pennsylvania history and settlements), students are split into groups and rotate between three activity stations–Fraktur, Artifacts, and a Work and Hope scavenger hunt.