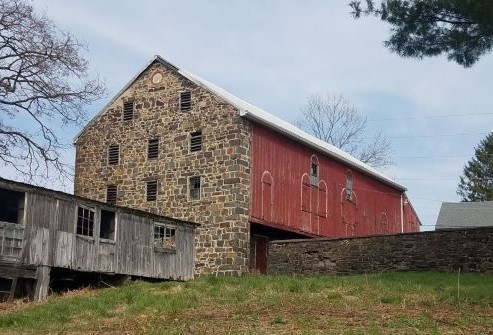 Once in a great while in our collecting work at the Mennonite Heritage Center, we have the unusual opportunity to sort through and select from a multi-generational family collection in its native setting — the very homestead where the objects were either made or acquired, used, passed down and preserved. This is the scenario that developed after I received a phone call last May from the owner of a Moyer family homestead in Salford Township, Montgomery County, inviting me to come for a visit and see a “few” things he thought we might be interested in.

Philip A. Moyer is the current and sixth-generation owner of his ancestral homestead in what was formerly Upper Salford (now Salford Township), originally owned by Jacob Meyer (1754-1826) and Maria Clemmer Meyer. As it turned out, the objects Philip was hoping I’d be interested in for the museum collection, I really wasn’t. As we looked around the homestead, it was other artifacts tucked away in various corners and rooms of the barn, wagon shed, and farmhouse that caught my interest. After a couple of visits and some hours spent poking around in rooms and closets in the farmhouse and dim spaces in the barn, I selected a number of artifacts that I believed were of value for the museum collection. Philip Moyer and BettyLou Koffel happily agreed to donate those objects. I’ll highlight some of them here.

Located in the southern corner of Salford Township, Montgomery County, but originally in Upper Salford, the homestead I visited was probably established in the last years of the 18th century by Jacob Meyer (Moyer) (1754-1826) and Maria Clemmer Meyer (1762-1834). It was apparently sub-divided from the larger homestead of his parents, Henry and Barbara Miller Meyer, which had originally been settled by his immigrant grandfather Hans Meyer (died 1748) who bought the 215 acre plantation in 1729. They were all members of the Franconia Mennonite congregation and are buried there.

Perhaps because Laadan Moyer remained a smaller-scale poultry and crop farmer, and the farm never evolved into a dairy operation, it has retained some of its traditional Pennsylvania German architectural and landscape features longer than most local homesteads. Some years ago, the farm’s development rights were sold which helps preserve the rural landscape in the immediate neighborhood. Driving or walking past the farm takes one briefly through an earlier setting.

(Click gallery photos below to enlarge)
On my first visit to the farm, while exploring upstairs in the barn, we realized there was an old piece of equipment sitting up on the roof of the granary, in a dark corner half buried under old loose straw. After uncovering and cleaning it off a bit, and bringing it into the light, I realized this was a fairly early, hand-operated fodder cutting bench. It exhibits skilled hand-forged metal work and excellent wooden craftsmanship. Every piece of it is entirely hand-made and is in relatively good condition. I estimate it to be from the early 19th century.

We then found another entirely hand-made piece of farm equipment in the dark, upper level of the wagon shed, directly across the road from the barn. With a flashlight, I could see that it was an earlier type of wooden-beam, horse-drawn plow. On our second visit to the farm we lowered the plow from the second level of the shed (there were no stairs, only a crude, built-in ladder), and discovered that it had the date and initials of the maker stamped into part of the tongue iron: “J.B. 1861”.

Based on further research, it seems that “J.B.” was one Jonas Bergey, who in fact was a twenty year-old blacksmith living in the northern part of Franconia Township at the time of the 1860 census. The plow probably first belonged to Abraham M. Moyer (1837-1920), who married Mary Clemens in 1860, and would have been getting established on the farm in these years. It remained on the farm and was passed down to their son, Morris C. Moyer (1867-1937), and to his son J. Laadan Moyer.

Upstairs in the farmhouse, we found a solidly-built, chest-like piece of equipment which we soon determined must be a sausage stuffer. Made with thick pieces of hardwood and strong iron hardware, it also shows skilled handwork or perhaps small-scale manufacturing, and is from the mid-to-late 19th century. The sturdiness of the stuffer suggests that the family may have been making enough sausage to sell locally or to take to market in Philadelphia.

In rooms and corners of the farmhouse, various objects were found which were selected for the museum collection. I’ll show several here:

In one upstairs bedroom, long used for storage, we found a lovely hand-woven double-weave coverlet, from the early 19th century. Philip Moyer was quite sure the coverlet had always been part of the household, and since the estate inventory of his ancestor Jacob Moyer (1754-1826) names him a weaver, we can suppose that Jacob wove it. It was preserved and passed down through the generations.

Another exciting find, in the former “grandparents’ parlor” (in the unoccupied end of the house), was an early dough-trough table. Even though every Pennsylvania German farmhouse once had one of these, I don’t recall ever seeing one at the many household auctions I’ve attended over the years. Finally, here was one, probably from the late 18th century, in the very farmhouse it had long stood in. Actually, it’s probably older than that house. I can imagine it first sitting in the kitchen (die küche) of Philip’s ancestors, old Jacob and Maria Clemmer Moyer.

A number of other early, primitive farm tools and household utensils from the Moyer homestead were donated with this acquisition, but these photos give a sampling of the variety of artifacts given. We express sincere appreciation to Philip Moyer and BettyLou Koffel for agreeing to donate these family artifacts to the Mennonite Heritage Center.