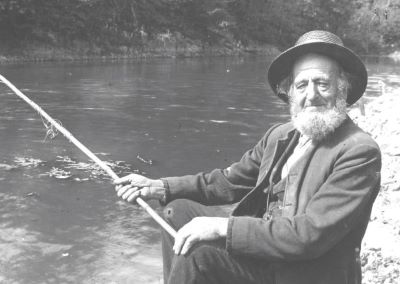 The Branch Creek Valley follows the East Branch of the Perkiomen Creek from Perkasie to Schwenksville. More narrowly, “Branch Valley” refers to the northeast corner of Lower Salford Township, where the Indian Creek (which drains the Indian Valley) flows into the Branch. These stories are from that neighborhood.

Dunkard Joseph A. Price (1817-1909), son of Daniel & Mary Anderson Price, lived near Vernfield in Lower Salford Township. He became known as the veteran fisherman of the Branch and Indian Creeks. As he grew older, he fished almost daily at his favorite spots. His simple secret of fishing was remembered and quoted by older people around Vernfield as follows: “First you gotta locate the fish: then you gotta know how to bait ’em.” He was remembered as a loner who avoided adults, but he was kind and gentle with children.

Vernfield photographer Jonas H. Nyce caught Joe Price a few times along the creek, once in a pose shown here. Joe fished until his death at the age of ninety-one.

Benjamin “Benj” Z. Alderfer (1831-1899) grew up along the Branch Creek in Lower Salford as the only son and heir of the township’s wealthiest citizens, Michael S. Alderfer and Catharine Ziegler Alderfer. As a young man, Benjamin enlisted in the army during the Civil War. Because of his wealth and influence , his father was able to have him extricated from the army. Michael Alderfer had been a broker in substitutes for draftees, including local conscientious objectors. Because he made a profit on this, his conservative Mennonite relatives and neighbors were scandalized. Michael was a member, or at least attended, the more progressive Schwenksville (Eden) Mennonite Congregation. His son Benjamin apparently never joined a church, although he too grew up in the Salford Mennonite community. It was said Benjamin agreed with the liberal views of the Trinity Christian (Reformed) Church of Collegeville, which was founded by his progressive Hunsicker relatives.

Benjamin married Sarah Harley of a local Dunkard [i.e., Brethren] family. When she joined the Indian Creek Brethren congregation by immersion baptism, it greatly displeased him. She grew plainer over the years, but Benjamin remained fancy and proud. He built the fanciest Victorian-­style house in the township, patterned after a fine house he saw on one of his trips out west. Benjamin is buried in the Salford Mennonite Cemetery and in his will left money to the trustees for the care of his family’s graves.

Jacob Shutt Groff (1836-1908) grew up in Rockhill, Bucks County, where he learned the milling trade with William Godshalk in New Britain Township. After his apprenticeship, he was employed in the mill of Benjamin S. Alderfer, on the Branch Creek in Lower Salford Township. He married Alderfer’s daughter Anna. In 1878, he purchased the mill and enlarged it adding steam power. It was said to be one of the finest mills in the county.

Jacob Groff was known as a very strong man and a successful miller. It is said he would tie a 60 pound weight to his little finger and write his name on the wall. He, or one of his sons, could do chin-ups by grasping a bar underhanded. J. S. was also known as a gifted songleader and singing school teacher in the Salford Mennonite Congregation, where his strong voice could be heard. It is said he was very particular about the singing of the tunes, and would sometimes stop the congregation and start over. He had musical talents outside of the church, as shown by the fife tune he copied. It was entitled “Washington Crossing the Delaware”. It is claimed by his descendants that he played this tune on a melodeon at the wedding of one of his children. They say he enjoyed playing strong chords on the melodeon.

Jacob Heckler Moyer (1842-1914) was born in Lower Salford Township to Dunkard parents and Mennonite grandparents. As a young man, he was a cigarmaker. He lived in Ontario for several years. After living a worldly lifestyle, he was converted at an Evangelical Mennonite revival meeting. He later returned to Pennsylvania and became a charismatic preacher among the local Evangelical Mennonites, or Mennonite Brethren in Christ (now the Bible Fellowship Church).

Jakie and Jane Blackburn Moyer lived on the Indian Creek in Franconia Township. He was known as Rose Jelly Jake because he sold home medicines including “Rose Jelly” salve.

As a preacher, he would get happy in meeting and leap for joy, and was always ready to tell of his dramatic conversion and life experience. “Oh, it was blessed”, he would say, “when I began to tell in public what Jesus had done for me and it is yet my greatest joy, Hallelujah!” While a preacher for the Mennonite Brethren in Christ, his followers were known locally as Jakie Moyer’s People, or Jakie Moyer’s Gemay [congregation] and would hold their lively meetings in his home on the Indian Creek or at the place now known as Delp’s Meetinghouse in Franconia Township. He was also known as Hard-of-Hearing Jakie Moyer because he used an ear trumpet when he listened to sermons in meeting. Along with his medicines, he peddled religious books and cards . Because he believed strongly in divine healing, people would ask him why he peddled Rose Jelly. He would say “That’s for the people who don’t have enough faith.”

A member of the Salford Mennonite Congregation, Henry M. Clemmer (1849-1936) was ordained first a deacon in 1888, then a preacher in 1908. His brother Isaac M. Clemmer succeeded him as deacon. Henry was a cigar maker, a carpenter and had a farm along the Branch Creek, below the Salford Meetinghouse. He was a traditionalist and the last German preacher in the Salford Congregation. A grandson remembers Henry practicing his sermons in the carriage on the way to church, while he let the horse pull slowly up the long hill. Remembered for his sharp wit and sense of humor, older people from Salford still quote him.

On one occasion, when the old pulpit in the meetinghouse was being removed, someone found nutshells under the place where Henry sat. When jokingly asked, “When did you crack those nuts?” Henry responded, “Why, when you were sleeping!” When a young girl in the congregation asked him why he never preached in English so she could understand him. Henry’s answer was, “Would you understand me any better in English? If you really want to hear my message, you’ll understand it in German!” Once, while he was taking a midday rest after doing some carpentry work on a nearby farm and the flies were bothering him, someone asked if they shouldn’t chase the flies away. His answer: “Let the flies alone, they have their work too.” He was also quoted as saying: “It’s a weak Christian that has to be told everything he has to do.”

Henry chewed tobacco and smoked cigars. When a preacher from the midwest, who was opposed to tobacco, visited Salford, someone asked Henry how he was going to handle this. Henry responded, “This preacher will go home again.”

Although the traditional primary role of a woman in the Mennonite community was to be a keeper of the home and family, there were exceptions. A few women were involved in the economic growth of the community. Some had special gifts in business.

Ann Garges (1801-1885), married to Henry Lederach, a blacksmith in the village of Lederach, was a 19th-century general store proprietor. An account published in 1888 records that “Ann Garges, like nearly all the Gargeses, had the knack for making money.” Ann, who lived in the village of Lederach, started a store in her home which was located on a main thoroughfare where three roads converge at a five-point intersection. [2020 note: The store building, at 501 Old Skippack Road, has recently been renovated into office space.]

Every day the stage coach, which ran between Allentown and Norristown, stopped at this crossroad. When Ann first started her store “there were no shelves in the room, for she commenced on a small scale, a large table con[tained] all the dry goods. Groceries and other things were kept in small quantities, and the stock was increased no faster than the funds increased, thus doing a sure and safe business. Gradually, however, as he (Henry) worked at his trade and she tended her store, the funds increased until they had not only shelves in their room, but the shelves full of goods, and groceries and other things in large quantities, as was becoming to a country store.”

Another general store was opened across the comer at the Lederach village intersection. However, this competing store did not succeed because the Lederach store was so well managed that “to run opposition against them was [like] running against the wall.”